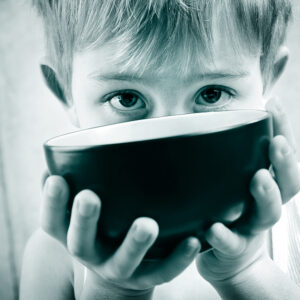 In the world of humanitarian aid, we have our own “F-word” that we try to avoid saying – but it’s probably not what you’re thinking. Famine. Extreme deprivation of food. Under official definitions of famine, “starvation, death, destitution and extremely critical levels of acute malnutrition are or will likely be evident.” It is the worst-case scenario that we don’t declare until conditions have reached absolute catastrophe. It is the kind of situation where families have to make unimaginable choices about which of their loved ones live and which will die.  Before things get to that point, we intentionally stick to terms like “extreme hunger” or “food crisis” to maintain a certain level of respect for the gravity of what the word famine entails.

There are currently 34 million people in the world – nearly the same number of people as the population of California – who are standing on the precipice of famine. Most of them are living in areas of the world wracked by conflict, with an estimated 155,000 people in parts of Yemen, South Sudan, and Burkina Faso presumed to be living in famine or famine-likely conditions. While these countries are of the most urgent concern, food insecurity is also rising at shocking rates in almost every other country affected by conflict, including Afghanistan, Haiti, Syria, and the Democratic Republic of the Congo. The COVID-19 pandemic has no doubt contributed to global hunger as well, as the shock to the global economy has disrupted markets, leading to a rise in food prices and the decimation of livelihoods in contexts where people often don’t have access to social protection measures like unemployment pay.

The last time we saw such an imminent threat of famine was in 2017 in large regions of Nigeria, Somalia, South Sudan, and Yemen. But we were able to avert a large-scale crisis with a strong humanitarian response backed by funding and political will. However, as we face this threat again four years later, there is a growing fear that we may not receive the political and financial support needed to avoid mass starvation. At the time of writing, the UN’s $7.8 billion appeal to respond to global food security needs is only 5 percent funded. At the same time, we are seeing many of the world’s major humanitarian donors making extreme cuts to their international assistance budgets, just when people need aid the most.

In March this year, the UN Secretary-General announced the creation of a High-Level Task Force on Famine Prevention to drive action and stave off famine in the four highest-risk countries: Yemen, Burkina Faso, northern Nigeria, and South Sudan. This most welcomed initiative comes at a critical time, but in order to be successful, it must be properly funded and supported by substantial political efforts to address conflict, strengthen food systems, and provide assistance to those in need.

Right now, there are 34 million people in the world whose situation worsens by the day as conflicts rage on and the COVID-19 pandemic worsens across the world. We need concerted action, but perhaps most importantly, what we need is a sense of urgency. Because by the time we say the F-word, it is already too late.

Makayla Palazzo is a Policy & Advocacy Officer at Concern Worldwide US, a global humanitarian organization focused on the world’s most vulnerable. She wrote this for InsideSources.com.