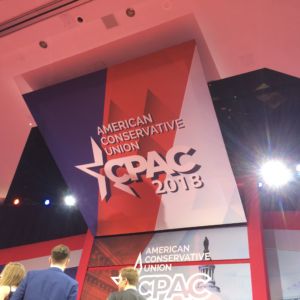 President Donald Trump is on the right track with his first year now complete, according to guests at a major conservative conference outside of Washington D.C.

The Conservative Political Action Conference (CPAC) attracts many attendees from conservatives, libertarians, and others on the political right. Politicians and pundits give speeches in a large auditorium while groups set up booths so guests can learn about their organizations and sometimes collect merchandise.

President Trump has had a very eventful first year between his aggressive agenda and fierce opposition from the left. He has used his executive powers to reduce regulations and worked with congressional leaders to pass tax reform. He has also been tied to an alleged attempt by Russia to rig the election – which is being investigated by Special Counsel Robert Mueller. Overall, though, conservatives at the conference seem to like the path the president has taken them on.

“I loved the president’s speech today,” CPAC guest Rodney DeShong told InsideSources. “He was right on topic for everything. If we can’t take care of ourselves, we can’t take care of anyone else. Same thing with guns. You can’t only have bad guys with guns because they’re going to get them whether there are laws or not.”

The Tax Cuts and Jobs Act became the first major legislative accomplishment for the president when he signed the plan into law Dec. 22. The law lowers business and individual rates while getting rid of certain deductions and exemptions in order to simplify the tax code. Democrats have contested the law is really intended to help the wealthy and large corporations.

The business community responded positively to the tax reform law with some large corporations offering raises and bonuses to their employees. Many taxpayers are also reporting their paychecks have grown with the lower rate on their income taxes.

“Right now I’m on disability and as of this month I get an extra $35 a month in my check,” DeShong said. “That doesn’t seem like much to most people, but when you’re living on a fixed income, $35 that you weren’t expecting, that adds up. It’s deeply appreciated. It’s just baffling how these politicians can have a lifelong career, be paid, and nothing gets done. It’s ridiculous, it’s a joke.”

ExxonMobil, Pfizer, Lockheed Martin, Honeywell, and many other companies have also announced plans to reinvest more into their domestic operations in response to the tax reform bill. Washington state radio host John Carlson believes these successes have helped to bring conservatives together.

“I only come [to CPAC] every few years to take the temperature of what’s going on,” Carlson told InsideSources. “In the past, there has been a lot more division and a lot of fragmentation and this year there seems to be a lot more unity, a lot less controversy from within. I think a lot of people are pleasantly surprised at Donald Trump’s record for his first year.”

Carlson notes the president brought a unifying message during his conference speech by focusing on issues that conservatives generally agree on. The president spoke about tax cuts, foreign policy, border security, gun rights, and the decision to move the American embassy in Israel – while avoiding more divisive issues like trade.

“Conservatives are used to electing people and being disappointed,” Carlson said. “You can probably say the same thing about liberals. They want someone who is a progressive and get let down from all the compromising and everything. But Trump has actually been a pleasant surprise.”

Carlson adds that his approval rating is rising as people figure out his tax reform law is actually helping them. Some other guests believe there are divisions forming within the conservative movement, but that basic principles like limited government and free markets remain strong.

“I see the Republicans splitting,” University at Buffalo student Shamus McGovern told InsideSources. “There is an establishment GOP and a punk rock version of conservatism. When I say punk rock conservatism, I mean it’s been detached from Christianity and religion but still holds the basic principals of conservatism. You know, limited governments, free markets, so on and so forth.”

McGovern adds it’s understandable with religion being on the decline in the country. He notes that while he is a Christian conservative he has a lot of friends who are not. McGovern thinks the president is doing well, but still has a few major issues he should resolve.

“I would love to see an infrastructure bill happen,” McGovern, who is also a member of the youth conservative group Young Americans for Freedom, said. “I think that’s a bipartisan bill that Democrats can hop on board. I think he has to deal with DACA, that’s huge, and maybe takeaway from some of the entitlement programs. He wants to do the Blue Apron program, which I think is a fantastic idea.”

The CPAC straw poll found that 93 percent of conference guests approve of the job the president is doing. The poll also showed that 79 percent of attendees want the House and Senate to do more to support the president.