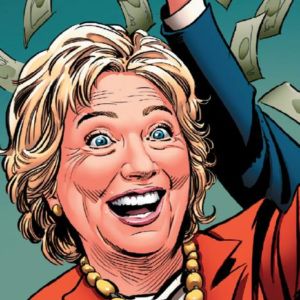 It started with a simple inquiry about graphic design.

About a year ago, comic book artist Brett Smith emailed Stephen Bannon, the Breitbart News executive who this week signed on to run the Trump campaign, to pitch some straightforward creative work for the conservative media outlet.

The pair didn’t know each other, but Smith was a Breitbart fan. He hoped to lend the site the same talent he’d brought to Marvel and DC Entertainment, Cartoon Network and other clients like Hasbro over two decades.

Bannon, though, had something else in mind. He connected Smith with his co-producer on the documentary adaptation of Peter Schweizer’s bestselling book “Clinton Cash” — “The Untold Story of How and Why Foreign Governments and Businesses Helped Make Bill and Hillary Rich” — and the two soon began work on a new project: “Clinton Cash: A Graphic Novel.”

The finished novel arrived earlier this month from Regnery Publishing, serving up a satirical take on Schweizer’s investigation of alleged ties between Clinton Foundation donors and the Democratic presidential nominee’s work as secretary of state. Its goal: to reach a new audience, including younger Americans, with a more accessible, entertaining and indelible version of this political history.

“I would say ‘Clinton Cash: A Graphic Novel’ is easily the most subversive thing the right has done, maybe, since voting for Donald Trump,” Smith said in an interview with InsideSources.

Now he’s hoping it plays a role in defeating “easily the most corrupt politician of my lifetime.”

“I would support Daffy Duck over Hillary,” Smith said. “If Elmer Fudd was the nominee, I’d be voting for him.”

Depending on how well it does, “Clinton Cash” may revive controversy over Schweizer’s original reporting. He had to correct at least seven passages from the book for factual inaccuracies, and mainstream media have taken to calling the text “discredited.” Critics say Schweizer draws conclusions that aren’t supported by evidence, and the Clinton campaign dismisses these assertions as “conspiracy theories.” 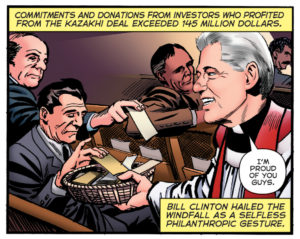 At the same time, the New York Times, the Washington Post and Fox News all entered into agreements with Schweizer to build on his Clinton reporting for news stories, and the liberal campaign finance reform advocate Lawrence Lessig took the book seriously in his own piece for the Post. “On any fair reading, the pattern of behavior that Schweizer has charged is corruption,” he wrote.

Setting aside its specific subject matter, “Clinton Cash: A Graphic Novel” marks the latest in a series of comic-strip depictions of American politicians during the Obama era. Civil rights icon John Lewis, the longtime Democratic congressman from Georgia, became the first member of Congress to write graphic novels with his “March” trilogy depicting the struggle for racial justice. Then Kentucky Sen. Rand Paul got his own comic book from Bluewater Productions. Obama himself appeared on the cover of an official Marvel comic, “The Amazing Spider-Man” #583, giving the web-slinging hero a thumbs up in January 2009. 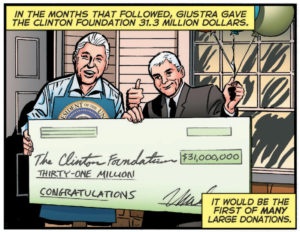 “Obama has appeared quite a few times in comics as a heroic or admirable figure, because mainstream superhero comics tend to lean left,” said Chuck Dixon, an accomplished comic book writer who adapted the text for “Clinton Cash.” A fellow politically conservative veteran of DC and Marvel best known for his 1990s Batman work, he told InsideSources Republicans typically are depicted in a less favorable light.

“When George W. Bush was president, he was portrayed as a coward in some comics, hiding under a desk when danger lurked,” Dixon said. He also claims his own conservative politics led him to be “blacklisted” at both DC and Marvel.

Smith, who has been less vocal about his conservatism as a color artist than Dixon has been as writer, said his politics haven’t caused him any problems in the workplace.