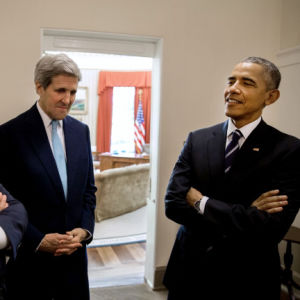 President Barack Obama talks with Vice President Joe Biden and Secretary of State John Kerry Nov. 6 prior to announcing the administration's rejection of the Keystone XL pipeline. Climate activists are urging the president to use racketeering laws to go after skeptics. (Official White House Photo by Pete Souza)
News

Two conservative-leaning watchdog groups on Tuesday asked the IRS to revoke the tax-exempt status of the Institute of Global Environment and Society, a federally-funded nonprofit that has come under scrutiny after calling for criminal investigations of global warming skeptics.

In a complaint letter to the IRS, Cause of Action and the Competitive Enterprise Institute jointly accuse the Rockville, Md.-based IGES, which describes itself as “an institute dedicated to climate research in service of society,” of tax fraud and the misuse of public funds:

“IGES’s primary purpose is to inure to the private benefit of its founder and president, Dr. Jagadish Shukla, and his family, rather than to accomplish any exempt purpose. The risk of inurement is further substantiated by evidence suggesting Dr. Shukla and his wife funneled federal grant dollars into an Indian charity that provided compensation to Dr. Shukla’s family members. Because IGES’s monetary contributions are derived solely from federal funds, the risk of inurement does not simply involve prohibited transactions by a disqualified person who fails to report to the IRS, but subsumes an additional misuse of taxpayer dollars, justifying immediate investigation and revocation of IGES’s charitable status. Further, referral to the IRS’s Criminal Investigation Division is warranted.”

According to the complaint filed by the two Washington-based groups, Shukla and his wife, also employed at IGES, which is largely funded through grants from the National Oceanic and Atmospheric Administration, NASA and the National Science Foundation, were paid more than $1.5 million in compensation from 2012 to 2014, while also funneling funds to other members of their family.

Shukla, head of IGES and a climate professor at Northern Virginia’s George Mason University, is one of 20 scientists who signed the Sept. 1 letter to President Barack Obama advocating the use of RICO (Racketeer Influenced and Corrupt Organizations Act) – a 1970s-era law intended to help prosecutors go after the mob – to investigate “corporations and other organizations that have knowingly deceived the American people about the risks of climate change, as a means to forestall America’s response.”

In their letter, the scientists cite Sen. Sheldon Whitehouse, D-R.I., who has promoted on the Senate floor several times the use of RICO laws against what he has called the “climate denial campaign.”

Whitehouse has pushed back against critics who have framed calls for use of the RICO Act as an attack on free speech, responding that “fraud is not protected by the First Amendment.”

But the letter from Shukla and his fellow scientists has also drawn attention from one the most vocal and most powerful climate change skeptics in Washington — Texas Rep. Lamar Smith, R-Texas, chairman of the House Committee on Science, Space and Technology. Smith last month announced his own panel would launch an investigation of Shukla’s group.

“IGES appears to be almost fully funded by taxpayer money while simultaneously participating in partisan political activity by requesting a RICO investigation of companies and organizations that disagree with the Obama administration on climate change,” the Texas Republican said in a statement.

Smith, who is involved in another high profile fight with scientists at the NOAA over internal communications related to a climate change study, asked the IGES to preserve e-mail between Shukla and other signers of the RICO letter, including several colleagues from George Mason as well as researchers at the University of Washington in Seattle, Rutgers University in New Jersey, the University of Maryland at College Park, the University of Texas and Columbia University.

A phone number listed on the IGES website is disconnected and attempts to reach Shukla at George Mason University for comment on this article were unsuccessful.