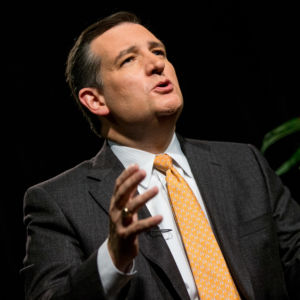 On the list of things that have gone wrong for Ted Cruz recently — losses in South Carolina and Nevada, the firing of his communications director, the infamous “Ben-Carson-Is-Quitting” email — kicking a controversial poster artist off the official campaign website probably ranks near the bottom. 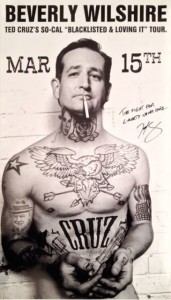 Still, it had to hurt — it was only last week, after all, that Cruz was telling Anderson Cooper during CNN’s Town Hall event how much he enjoyed Los Angeles’ artist Sabo’s unauthorized image of the Texas-senator-as-gangbanger: Shirtless, defiant and covered in tattoos, a cigarette dangling from his lip.

After spotting the street art in L.A. in 2014, Cruz embraced Sabo’s provocative image, often citing it as an example of his ability to laugh at himself. “Would it kill the Republicans to crack a joke?” a smiling Cruz asked Anderson, before delivering a punchline he’s used many times before when referencing the poster: “I have to say I noticed a glaring error. I don’t smoke cigarettes.”

By Tuesday, however, Sabo and his artwork had been removed from the Cruz campaign’s online store — just days after “The Young Turks,” a liberal online talk show, reported the artist has a history of using racial slurs on social media.

The Cruz campaign was silent on the controversy Tuesday, but Sabo criticized the senator for dumping him, tweeting that “Team Cruz bent to The Young Turks and took me off their site.”

Sabo, who tweets as “unsavoryagents,” then ran off a string of tweets, complete with racial slurs, firing back at critics accusing him of being a racist:

A RACIST ISN’T A PERSON WHO SAYS THE WORD “NIGGER” A RACIST IS A DEMOCRAT WHO PUSHES FOR POLICIES THAT ENSLAVE THE BLACK COMMUNITY. 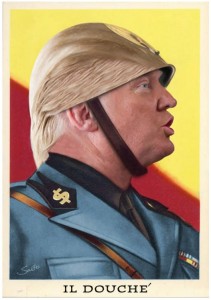 Sabo also tweeted that he’d switched his support to Donald Trump — though the decidedly unflattering artwork he created for the New York billionaire may indicate some sarcasm in that endorsement.

Sabo told The Washington Post in an October interview that he can’t stand Trump. “He’s a demagogue, and he’s capitalizing on the rage in the party.”

“I’m not a bigot, though I may sound like it,” he also told the Post, and that while he has right-leaning view, he does not consider himself a conservative.

He met Cruz for the first time at the Conservative Political Action Conference last year in Washington, where he’d come to sell shirts and posters with the Cruz image.

When the Texas Tribune raised questions in September about the Cruz campaign’s association with Sabo — given the artist’s prolific use of racial epithets, sexual imagery and profane language — Sabo himself seemed puzzled. “I honestly still don’t believe my name is on that site,” he told the political news website. 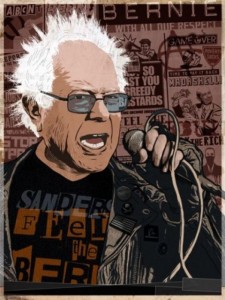 “This was a local street artist in L.A. that just put them up on his own,” he said. “But we decided to have some fun with them. So we posted on Facebook, we said, ‘Well, for whatever reason, these posters started appearing all over Hollywood.’ Part of getting young people is having fun, loosening up.”

Uygur suggested his viewers might prefer The Young Turks’ own pro-Bernie Sanders poster, “Bernie So Punk” — featuring the Vermont senator as a spiky-haired punk rocker — to the Sabo poster.