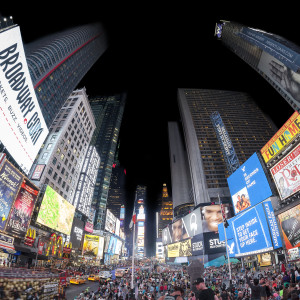 Republican presidential candidate Ted Cruz has urbanites up in arms after his condemnation of “New York values” during Thursday’s GOP debate. In a swipe at his chief rival, Manhattan business mogul Donald Trump, the Texas senator said “everyone understands that the values in New York City are socially liberal or pro-abortion or pro-gay marriage, focused around money and the media.”

This set off an understandable (one might say intentional) media firestorm, particularly in the Big Apple. Journalists flipped out. Celebrities fired back with a flurry of tweets. New York’s Democratic mayor and governor, often at odds politically, came together to demand an apology.

And, of course, there was the front page of the always irascible Daily News. 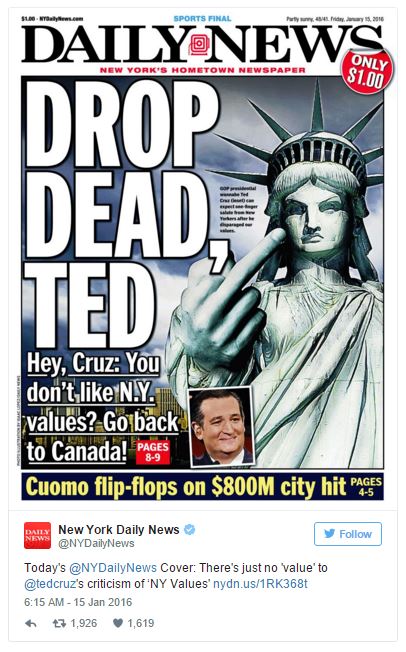 In one sense, the outrage is understandable. A city of eight million people isn’t going to like its prevailing morals being trashed. The millions of Americans who love New York might not be thrilled either. Some liberals heard anti-Semitism in Cruz’s comments. Meanwhile, many conservatives brought up 9/11, including Trump as he responded to the senator on the debate stage.

“When the World Trade Center came down, I saw something that no place on earth could have handled more beautifully, more humanely than New York,” he said to applause. “I have to tell you, that was a very insulting statement that Ted made.”

Here’s the thing, though: Cruz’s comments are nothing new. Republican have a long tradition of disparaging heavily Democratic cities, particularly those famous for cultural liberalism. In fact, they’ve often made a point of contrasting these places with conservative small towns, which they see as paragons of virtue.

The obvious precursor to “New York values” in modern American politics is “San Francisco values.” There’s an entire Wikipedia entry about the term. (And a Conservapedia page.) The anti-gay epithet was once in fashion with Fox News hosts Bill O’Reilly and Sean Hannity as well former GOP speaker of the House Newt Gingrich. San Francisco native Rachel Maddow highlighted use of the phrase on her progressive radio show in 2006. It appeared in television and radio ads supporting Republican candidates, some of which also threw around the adjective “big city” in a negative context. Talk radio host Michael Savage, meanwhile, took an even less subtle approach: railing against “San Fransicko.”

The main bit of anti-urban language that’s been used against President Barack Obama in particular is “Chicago-style politics.” As Jacob Weisberg wrote in Slate, this term references former Windy City mayor Richard J. Daley and his political machine. However, in a modern context it’s “mainly just a way … to call Obama corrupt without coming out and saying so.” Typically presidents don’t come from cities, and Obama’s urban identity has been a source of consternation for conservatives.

“We believe that the best of America is in the small towns that we get to visit, and in the wonderful little pockets of what I call the real America,” former Republican vice presidential candidate Sarah Palin said in 2008. She then referred to these places as “very pro-America areas.”

Why Palin and Cruz make these comments is no mystery. They’re trying to ingratiate themselves with suburban and rural voters who are more likely to be Republican. The question is whether this is sound strategy long-term. Trends show Americans flocking to cities, and at some point, if only for self-preservation, the GOP needs to start winning them too.