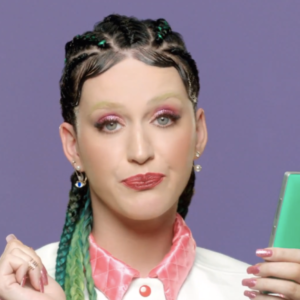 Cultural Appropriation in the Theater of the Absurd

Katy Perry, the vibrant pop singer with 100 million Twitter followers, “confessed” during a June 10 podcast that she had sinned. The sin: Perry wore cornrows during her song video “This Is How We Do.”

She didn’t kill anyone, didn’t commit a felony, didn’t embezzle money from a corporation. Or even commit littering or loitering. Instead, Perry (real name Katheryn Hudson) simply displayed a hairstyle. She committed a social-cultural sin, they say.

Something called “cultural appropriation.” Which is a bizarre way of saying, “Somebody stole someone else’s culture for gain or profit.” These days, you often hear the term used fancifully on college campuses across the nation. Where the snowflakes rule.

OK, it’s widely known that cornrows are a common hairstyle among black women around the world. In a historical sense, for sure.

With both of them perched in a lotus position on a creamy-white couch, Perry was interviewed for DeRay McKesson’s “Pod Save the People” podcast. The ubiquitous McKesson is one of the lead protesters/agitators in the Black Lives Matter movement.

In the podcast, one can hear Perry recall a conversation she had with a black female friend about hair culture, as she apologizes, saying, “She told me about the power of black women’s hair, and how beautiful it is, and the struggle. And I listened, and I heard, and I didn’t know. And I will never understand some of those things because of who I am. But I can educate myself, and that’s what I’m trying to do along the way.”

It’s not quite a sobbing Jimmy Swaggart-style confession-and-atonement ceremony, but the point was clear. Another point of clarity: This Katy Perry episode is totally nonsensical, regardless of her sincerity or insincerity in issuing an apology. That doesn’t matter in silly word games.

And a question: Do only black folk have the market cornered in this cultural appropriation theater of the absurd? What about black women who dye their hair blond or wear blond wigs or highlights? Shouldn’t they have to apologize to white women for “stealing” their traditional looks?

The same applies to red-haired or auburn-haired white women. So when do white actresses Emma Stone and Christina Hendricks receive their apologies from black women? Or is this strictly a one-sided deal? Meaning only black women garner the cultural benefit of apologies.

With that, just who is the deciding voice on this term “cultural appropriation”? Who the hell is the arbiter here?

However, as one black commenter posted on social media: “Forgive me for asking a stupid question, but how do black people benefit in any substantial way because Katy Perry apologized for wearing cornrows?”

And if black folk do gain something by shaming Ms. Perry, how in the world do you explain it?

As Albert Einstein, that noted game-changer for the ages, once declared: “If you can’t explain it simply, you don’t understand it well enough.”

Perhaps this whole cultural appropriation thing simply boils down to the “versus” ideology. That means instead of being for or pro something in today’s society, the cool, new hip approach is always to be against, or “versus,” that something. As in always maintain a state of opposition regarding some idea or act or belief. Or even a person.

With that, suppose those two black Capitol Hill police officers who last week helped protect the Republican congressmen during the mass shooting adopted that “versus” theory, especially Crystal Griner, the gay woman who is married to a woman.

Much has been made of the fact that wounded House Majority Whip Steve Scalise consistently has spoken out against gay marriage. Griner was part of Scalise’s security detail that fateful day on the baseball practice field in Alexandria, Va., across the Potomac River from the Capitol. She could have easily rationalized that, “I’m not going to protect or defend Steve Scalise during this mass shooting on the grounds of Scalise being against my cultural lifestyle. Or protect any other Republicans, for that matter.”

But Griner didn’t take that versus approach as she helped subdue an obviously enraged gunman harboring his own anti-Republican-whatever agenda. Griner instead admirably performed her job with integrity and nobility, and, in fact, was wounded in the process.

Her decision-making and subsequent actions that day weren’t about politics or cultural ideology or any of that sideshow stuff. Remember, a black gay woman took a bullet for a team of Republican congressmen. And silly cultural bickering didn’t get in the way.