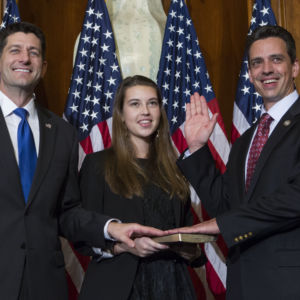 Cybersecurity and Privacy Will Be the New Price of Appropriations, Chairman Says

Cybersecurity will be a major focus of the new Congress thanks largely to Russian cyber-meddling in the 2016 election, but that focus will stretch from national defense all the way to Americans’ wallets and the apps that access them, according to the new chairman of a powerful appropriations subcommittee.

Georgia Republican Rep. Tom Graves was tapped this week to take over the House Appropriations Committee’s Financial Services and General Government Subcommittee, and in a statement Tuesday wasted no time highlighting cybersecurity as a significant concern the committee will address.

“[W]ith the growing importance of financial technology – or ‘fintech’ – in our 21st century economy, this assignment puts me in a great position to work on new approaches to cyber security so American businesses and the families who use their services are protected from cyber threats,” Graves said.

Graves’ new chairmanship gives him oversight of independent agencies including the Federal Trade Commission, Federal Communications Commission, Securities and Exchange Commission and the Treasury Department. They’re among a number of agencies, like the Consumer Financial Protection Bureau (CFPB), that have claimed some portion of jurisdiction over fintech, an area that includes crowdfunding platforms such as Kickstarter and peer-to-peer payment apps like Venmo.

The CFPB passed new rules late last year to apply specific federal consumer protections to fintech and other portions of the “prepaid” market, which includes prepaid credit cards. The rules include adequate disclosure, liability protection, and other requirements. The FTC held a forum examining the technology and discussing regulations shortly after. Fintech may also be subject to laws like Dodd-Frank, the Electronic Funds Transfer Act, the Truth in Lending Act, and other banking regulations.

Graves, who also sits on Appropriations’ defense subcommittee, said he plans to combine his experience across both to streamline an oversight path that will protect consumers while allowing the technology to grow.

“There’s so many different operations or silos in effect right now that it creates a lot of challenges,” Graves told InsideSources. “My goal, as one who has deep interest in this area of financial technology, will be using those two committees to somewhat bridge the divide.”

“In essence we have a new theater in which to operate and to define the rules in, and there’s a patchwork of rules and understanding,” he continued. “So I believe through the this next several months, we can begin that dialogue and dissecting how we can begin pulling things together while at the same time protecting consumers from threats, but also protecting privacy.”

Those goals include streamlining the reporting of cyber incidents, designating go-to authorities, and protecting user privacy.

“There’s no 9-1-1,” the chairman said. “How do we begin identifying what is the process in place for when somebody knows that they are being infringed upon or violated electronically, so that they can alert others and ultimately have recourse of some sort, while at the same time identifying privacy is a major priority as well.”

Graves said he had yet to review the latest standard for strict federal privacy rules passed by the FCC in October. The rules go beyond traditional FTC standards by barring internet providers from tracking and monetizing subscriber data, including browsing history and app usage, without subscriber permission.

“I do know that commission is one that certainly will be under discussion about who will be the next chairman,” Graves said. “That’s a fun commission to have a discussion with on some of these issues, there’s a lot of disagreement even amongst the members of that commission.”

Graves is also among a large group of bipartisan lawmakers supporting an investigation of intelligence agency assertions that Russia interfered with the 2016 election in favor of President-elect Donald Trump.