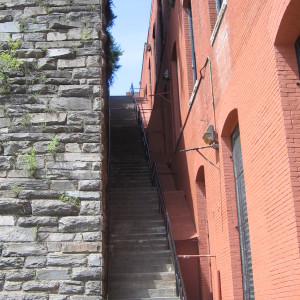 Director William Friedkin and and writer William Peter Blatty were on hand as Mayor Muriel Bowser and D.C. Council member Jack Evans unveiled a plaque next to the steps. A crowd of hundreds watched from the parking lot at the foot of the staircase, and event organizers set the mood with spooky red lighting and dry ice smoke effects.

Evans, who represents Georgetown, read a ceremonial Council resolution thanking Friedkin and Blatty for helping to make the neighborhood “a destination for film lovers from around the world.” He said he re-watched The Exorcist with his teenage children just a couple of years ago and “it was as scary as it always was.”

For their part, both of the filmmakers behind the 1973 classic were overwhelmed by the praise.

Friedkin, who won the “Best Director Oscar” for The French Connection in 1971, said the plaque for the steps “means more than any of the awards that I’ve ever won.” Blatty said it was the highest honor he’d ever received, notwithstanding his Academy Award for “Best Adapted Screenplay.”

“Academy Award winners are the plague of the earth,” he said. “There are so many of them. But how many have a staircase in prime real estate?”

As was noted Friday night, the “Exorcist Steps” plaque is a rare Washington monument that has nothing to do with politics or government. Yet politics wasn’t entirely absent from the unveiling ceremony. Evans took the opportunity to praise Mayor Bowser’s performance in office, and Bowser pledged that D.C. would double its efforts to become a “film town” where moviemaking lifts the local economy. 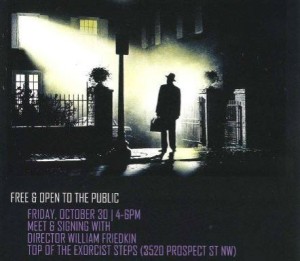 “You know what film does for a lot of cities? It employs people,” the mayor said. “Artists go to work. Craftsmen go to work. People all over who are building sets go to work in their good-paying middle class jobs.”

Bowser recognized American University staffer Andrew Huff, who conceived of Friday’s event and led the change to organize it. Huff was one of many Washingtonians present with vivid memories of seeing The Exorcist for the first time. Another was Tim Krepp, a professional tour guide and author of the book Ghosts of Georgetown.

Krepp first watched The Exorcist as a high school kid at a Georgetown University summer program, and he remembers coming down to the steps with his friends after the movie. “It was one of my first formative memories of Washington, D.C.,” he said.

The Exorcist was nominated for 10 Academy Awards, and it won two, for “Best Adapted Screenplay” and “Best Sound Mixing.” One of the highest-grossing movies of all time, it’s been honored by the American Film Institute and the Library of Congress.