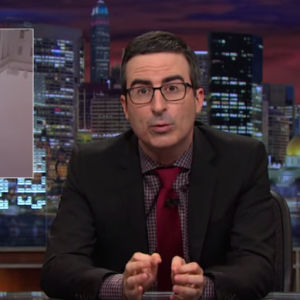 Washington, D.C.’s local politicians were overjoyed when comedian John Oliver took up the cause of District statehood on Sunday, and now at least two D.C. Council members want him honored at city hall.

Democratic Council member Mary Cheh told InsideSources she was “ecstatic” that Oliver took 17 minutes of his HBO show Last Week Tonight to explain how D.C. lacks voting representation in Congress and control over its own municipal finances. Cheh called the segment “the best thing that’s happened to the District in terms of gaining national attention to our plight” and said she would draft a resolution thanking the comedian. The lawmaker added that she hopes Oliver will come and be honored at a public city hall ceremony, which could attract more national media coverage.

“We should definitely formalize inviting him down here,” Cheh’s colleague David Grosso, an independent Council member, told InsideSources. Grosso heaped his own praise on Oliver, calling Sunday’s segment “the most comprehensive and accurate analysis of the situation in the District” and “extremely important for our [statehood] movement.” He was even more enthusiastic on Twitter, dubbing the clip “the ultimate smack-down to Congressional meddling in DC affairs.”

Grosso reminded InsideSources that Oliver’s segments have repeatedly resulted in public policy changes since its debut last April. Now the two District lawmakers are hoping it will happen again.

A spokesman for D.C. Mayor Muriel Bowser said she was unavailable to comment on Tuesday. However, he noted that Bowser, a Democrat, tweeted out Oliver’s segment with her own message: “The District needs representation, NOW.”

That sentiment was shared by D.C.’s current non-voting representative in Congress, Eleanor Holmes Norton, who issued a Monday statement praising Last Week Tonight for the “unsolicited gift of prize-worthy satire.” The Democrat also announced plans to hold a Capitol Hill briefing on District statehood, complete with a screening of the Oliver clip.

Part of what makes D.C. leaders so grateful for Sunday’s show is its massive audience. The Washington City Paper noted that, as of last September, “Last Week Tonight was registering an average of 4.1 million weekly viewers from TV airings, DVR, and on-demand plays,” which is “more than six times the population of D.C.” That means Oliver undoubtedly reaches many people who aren’t familiar with the District’s unique predicament. Plus, it’s safe to say the comedian’s viewers tend to be younger and left-leaning — just the sort of Americans who ought to be sympathetic to D.C.’s cause.

Oliver rose to prominence on another political comedy program, Comedy Central’s The Daily Show, whose founding host Jon Stewart is set to retire from the show this week. As Politico reported, “Stewart can, at times, be a more potent influence on policy than [President Barack] Obama himself”:

The 52-year-old funnyman is widely credited with changing how the government treated military veterans and Sept. 11 first responders and for the cancellation of a hyperpartisan CNN talk show. His broadsides against President George W. Bush’s Iraq War and a series of Obama missteps had a searing effect on how Americans thought about Washington.

The question remains whether Oliver, or some other comedian, will step in to fill Stewart’s shoes.