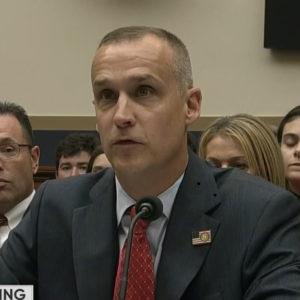 Before Tuesday’s House Judiciary Committee hearing, Chairman Jerrold Nadler (D-N.Y.) said it was time to stop debating what to call it. “Some call this process an impeachment inquiry. Some call it an impeachment investigation. There is no legal difference between these terms, and I no longer care to argue about the nomenclature.”

Lewandowski is President Donald Trump’s former campaign manager and is almost certain to run for U.S. Senate in 2020. He’s openly discussed entering the NHGOP primary for weeks, and President Trump gave Lewandowski’s potential candidacy a shout out at his rally in Manchester last month.  If he runs, Lewandowski would be in a four-way race to take on Democratic Sen. Jeanne Shaheen in the general election.

Then came the news that he was being subpoenaed to testify before Nadler’s committee.

For a traditional candidate, being asked to testify about your alleged involvement in an obstruction of justice case would be a problem.  Bur for Lewandowski, who already owned the “Pro-Trump” lane in the New Hampshire Senate primary, it was the perfect political platform.

“Corey should report this hearing as an in-kind contribution from the Democrats,” longtime NHGOP strategist Tom Rath told InsideSources.

When New Hampshire Journal earlier asked Lewandowski what Granite State Republicans should expect to see at Tuesday’s hearing, he said “A fighter.” And Lewandowski delivered.

From the beginning he had Democrats on the wrong foot, demanding they give him a copy of the Mueller Report — as well as the specific citations of any references to it —  before he would answer their questions. With help from Republicans on the committee, Lewandowski and the GOP were able to force the Democratic majority to take two rollcall votes before Nadler could even finish his first five-minute round of questions.

Lewandowski came armed with a letter from the White House directing him not to answer questions beyond the findings of the Mueller Report or to discuss any private conversations he had with the president, a tool he used repeatedly to avoid problematic questions. He also took shots at the Democratic Party, political liberals in general, and the committee itself, at one point saying its members “hate President Trump more than they love their country.”

The committee objected, but GOP primary voters no doubt loved it.  The entire hearing was a tour de force for Lewandowski, one he could not have pulled off without the help of the Democrats.

First, the members were unprepared for the hearing.  Rep. Sheila Jackson Lee (D-Texas), for example, began her 2:00 pm questioning of Lewandowski with the phrase “Good morning, Mister Lewandoffski.” It went downhill from there. Democratic committee members repeatedly appeared frustrated or flummoxed by Lewandowski’s performance, allowing him to repeat his talking points/Senate campaign pitch on behalf of President Trump.

Second, the committee didn’t have a discernible strategy as to what they were hoping to accomplish with the hearing. Was there a piece of the impeachment puzzle Lewandowski could fill? Was there an incident in the Mueller Report he could highlight to their benefit? If so, they managed to keep it secret from the viewing audience.

And finally, the Democrats boxed themselves in by making a target out of Lewandowski. At one point, former Democratic 2020 hopeful Eric Swalwell (D-Calif.) demanded that Nadler find Lewandowski in contempt for refusing to answer the committee’s questions.  Nadler froze for a moment, clearly aware that such a move by the committee would be in a Lewandowski campaign ad before nightfall.

There are career Washington D.C. bureaucrats and officeholders for whom being declared in contempt of Congress would be a crushing professional embarrassment. Corey Lewandowski is not one of them.

“I will take it under advisement,” Nadler said.

“This was a huge win for Corey, and an absolute disaster for the Democrats,” New Hampshire GOP strategist Jim Merrill told InsideSources. “Democrats haven’t figured out how to go on the attack in this new era. They’re still using the pre-2016 playbook.”

Merrill would not go as far as to say Tuesday’s performance ensured a Lewandowski victory in the likely four-way GOP primary. “Election day is a long way away,” he cautioned.

Lewandowski was so prepared for the political opportunity that during the committee’s first break, he tweeted a link to a new PAC supporting his potential run, “Stand with Corey,” organized by veteran New Hampshire GOP operative Michael Biundo, and national strategists Marty Obst and John Brabender.

“This is not a Republican primary campaign. You are not on the campaign trail — yet,” Jeffries said. “This is the House Judiciary Committee. Act like you know the difference.”

Perhaps Rep. Jeffries and the Democratic majority should have thought of that before they issued their subpoena.