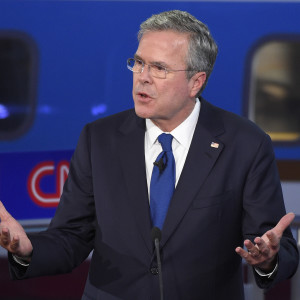 D.C. Rep. Eleanor Holmes Norton, a Democrat, said Friday that Republican presidential candidate Jeb Bush made an “ignorant” comment and “a terrible gaffe” when he advocated for an economic recession in Washington, D.C.

Bush’s remark came Wednesday in New Hampshire, where the former Florida governor was speaking to Fox News host Sean Hannity. Bush said he wanted to “disrupt Washington,” presumably by cutting the federal government, to boost the economy across the country. “Let’s create a little bit of a recession in Washington, D.C., so that we can have economic prosperity outside of Washington,” he said.

In an interview with InsideSources, Norton said Bush’s comments were particularly “ignorant” in the context of sequestration, the automatic federal spending cuts enacted by Congress that have already done great harm to D.C.’s regional economy. “If you took him at face value, you’d have to believe that his version of growth is robbing one region of the country to somehow pay another region,” she said. “Growth is about making sure there’s national prosperity, so you never call out a particular region.”

Norton also sees Bush’s comments as “a terrible gaffe” politically, given that the Washington region includes the swing state of Virginia, which is heavily reliant on defense spending. Defense is a traditional Republican priority, and it took a major hit as part of sequestration.

“This is a man who’s clearly run out of ideas,” Norton said of Bush. “He doesn’t speak very well, he’s never very precise, and he doesn’t have any ideas that would catalyze his own party.”

Asked “yes or no,” does Bush believe D.C. should be hit with a recession, as the country as a whole continues to recover from the Great Recession, Miller said, “He certainly wants to shrink the size of D.C. as laid out on his plan to reform Washington.”

Asked why in the hell a candidate for president of the United States would wish such a thing on an American city, Miller didn’t respond—not even to suggest it was a joke.

Nuzzi’s story provoked a few arguments between journalists on Twitter. The New Yorker’s Ryan Lizza wrote, “Good grief, this is the craziest thing Jeb Bush has said in this campaign.”

But National Review’s Jonah Goldberg thought Lizza was missing the point. “Forget the last six years, this has been a theme of conservative/populist (including left wing populism) for a century,” he wrote.

Lizza replied that shrinking government was one thing, but conspiring to damage one of the country’s economic engines was crazy.