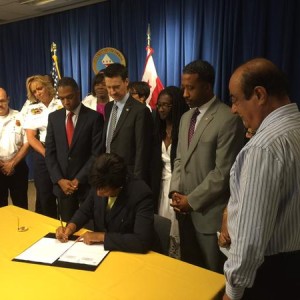 D.C.’s Mayor Says the Federal Government Must “Step Up to the Plate” to Fight Synthetic Marijuana

D.C. Mayor Muriel Bowser is urging federal officials to crack down on synthetic marijuana across the country.

At a Friday press conference, she signed legislation imposing strict penalties on District businesses that sell or possess the illegal substance.

The mayor also said, “We’re going to need the federal government to step up to the plate in combating synthetic marijuana.”

Bowser and D.C. Police Chief Cathy Lanier noted that synthetic drugs are on the rise in cities across the country. They’ve increasingly caused crime and overdoses in the District, but Lanier stressed, “This is not just here in Washington, D.C. This is happening across the country — across the globe, actually. We have to put our heads together and figure out what the national strategy is going to be to stop this madness.”

One recent D.C. crime that may be linked to synthetic marijuana use is the July 4th murder of 24-year-old political strategist Kevin Sutherland, who was stabbed to death on a Metro train in the middle of the day. The man accused of killing Sutherland was suspected of being high on synthetic drugs, according to police officials cited by the Washington Post.

Bowser addressed Sutherland’s death on Friday, although not as it relates to drugs. She expressed condolences to the American University graduate’s loved ones while assuring District residents that their public transit system is “vastly safe.”

Bowser said her heart goes out not just to Sutherland’s family, with whom she spoke earlier in the week, but also to first responders and Metro riders who watched in horror as the young man was attacked.

One troubling question being raised about the Independence Day incident — at the Washington Post and elsewhere — is why none of the roughly 10 other passengers nearby intervened during the assault. InsideSources asked Bowser what she thinks riders should do if a similar scenario were to unfold in the future.

“None of us knows what that situation was like,” the mayor said. “What I would tell all of our residents is to be safe and to call for help in the safest way that you can as soon as you can. While this was an extraordinary event on our Metro system, our Metro system is vastly safe.”

Bowser also had a message for anyone who might consider harming Metro employees or passengers in the future: you won’t get away with it.

Police officials at the press conferences said they couldn’t talk about whether synthetic drugs were linked to specific cases such as Sutherland’s, but they emphasized to reporters that witnesses to violent crimes often provide evidence that these substances are involved. Sutherland’s alleged killer was not tested for synthetic drugs, according to a D.C. Superior Court document obtained on Friday by Fox 5 News.