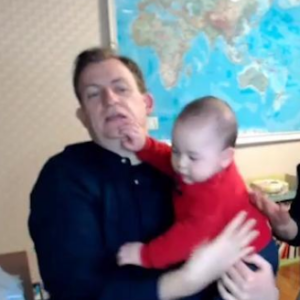 Last week, for one glorious afternoon, the world stopped and took a collective breath as Korea expert Professor Robert Kelly took 47 seconds to discuss the ouster of South Korean President Park Geun-hye on the BBC.

Of course, no one in the world saw that. What everyone saw was a lovable train wreck on live TV, courtesy of Kelly’s two young children and harried wife. Within seconds of the interview’s start, 4-year-old daughter Marion strutted into frame followed by 9-month-old James, gliding across the floor in a saucer-shaped contraption apparently designed to allow the very young access to places they ought never be. Finally, Kelly’s wife, keenly aware that everything on Earth was going wrong in front of Daddy’s webcam, swooped into the frame to collect her offspring and get all three of them out of there. It was possibly the best 47-second interview in the history of television.

The world wasn’t laughing at Professor Kelly; it was laughing near him. Almost everyone who saw the video commiserated with his plight. Parents knew his pain all too well, and the work-from-home crowd saw in him their worst fears realized. To his eternal credit, Kelly — a consummate professional throughout — took it all in stride and remained focused on his task. But the howls of laughter at the BBC studios, coupled with the shrieks of the children just outside his door, rendered the whole undertaking a joyfully hilarious fiasco.

Not everyone was laughing, though. The usual suspects instead went straight to outrage, and for all the same, tired reasons. The first cry was that once again the patriarchy had reared its ugly head. As the man sat pontificating, the criticism went, the poor woman was relegated to a voiceless role in the background. She was even, some said, obviously terrified as she came into the room to collect the wayward children. Others upped the ante, opining that the woman was obviously a nanny, or better yet “the help,” and that she clearly feared losing her job as the dust settled.

The perpetually offended couldn’t even see the humor in Kelly’s wife, whose name is Jung-a Kim, not “The Nanny,” straining to close the door from the floor after she had managed to get the children back out of the room. These are people for whom even the Keystone Cops could not elicit a grin.

These are the standard responses we’ve come to expect from the grievance community. But the rest of us took one look at that hot mess and knew better. Where children are concerned, this sort of thing is par for the course. It just happened to Professor Kelly and his family live on the BBC.

Professor Kelly spent a lifetime becoming an expert on Korean politics. But after 47 seconds, we will forever remember him as the father of a little girl in ridiculous glasses and a little boy in a saucer contraption who just wanted in on Daddy’s action. And that’s a pretty good way to be remembered.

Those 47 seconds exposed the scolds among us for the joyless, “progressive” school marms they are. And they now, officially, are boring the rest of us. Because in the end, when you see only the bogeyman of patriarchy where there are families, you are the real problem. And when you only see the Asian “help” where you should have seen a mother, you are the real racist.