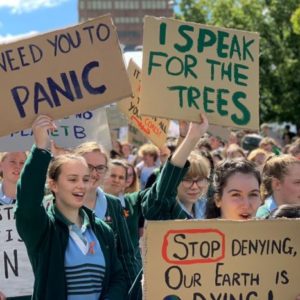 Michael Shellenberger, author of “Apocalypse Never,” has recently released a survey on people’s beliefs about climate change.  The title of his Substack piece, “Democrats More Likely to Believe False Information on Climate Change,” is not exactly surprising to those of us who have closely followed the issue for decades.  But, his article neglected to state what jumps out from the Google Survey sponsored by his employer, the think tank Climate Progress: Americans are profoundly wrongheaded about the issue.

The survey, which carefully screened responders to get its demographics right, asked for agreement or disagreement on four commonly invoked statements about climate:

The correct answers to the questions are 1) no, 2) no, 3) no and 4) heck no. Shellenberger found many more self-identified Democrats than Republicans answered “yes” to all four propositions.

Deaths from natural disasters have dropped by at least 90 percent in the last 100 years, nor does any reputable scientific body predict that this will reverse in the future. Insurance industry data show that, as a percent of GDP, damages have been declining since data became reliable around 1980, not just in the U.S., but worldwide, and U.S. emissions of carbon dioxide have dropped more than those of any other nation in the past 10 years. This is all documented in Shellenberger’s essay.

Frankly, the results were to be expected. The Democratic Party is all-in on the climate show, and answering yes to these propositions simply demonstrates common confirmation bias. What is a big deal is the survey demonstrates such profound ignorance.

Responses to each statement were broken down into the usual “strongly agree, agree, disagree, strongly disagree” categories as well as “don’t know/no answer.”

If the vast plurality of respondents agreed with things that are simply untrue, that’s logically going to lead to horrific policies, like the Green New Deal or its carbon-copy, the $3.5 trillion “infrastructure” bill. Garden-variety politicians respond to perceptions, while only the few and the courageous might serve reality.

Joe Biden is surely one of the former. How else to square his infamous July 23 telephone call to Afghan President Ashraf Ghani about the perception that the Taliban was about to take over everything.  “And there is a need, whether it is true or not, to project a different picture,” Joe said.

As far as greens are concerned, in the case of the climate survey, there’s obviously no need to change the “picture.” In three of the four questions (numbers 2 through 4), the respondents who agreed with something untrue were around three times the number that disagreed. For the first one, which is patently untrue—deaths from natural disasters have declined by 90 percent in the past century—there were 30 percent more wrong answers than right ones.

Here’s where the Democrat versus Republican wrongheadedness becomes critical. As perceptions trump reality (pardon the triple endentre, please), the Democrats feel they have a strong mandate for totally goofy policies, like Biden’s notion that all of our electricity will come from non-carbon-emitting sources by 2035. No realistic energy expert thinks that’s at all possible. However, what does that matter when a majority of people so terribly misunderstand climate change and its impacts?

This is not the first time in history that a populace has been led to believe things that are deadly wrong and to empower its government to institute horrible and destructive policies, despite having the slimmest of an electoral majority.  For reference, see the history of the 20th century.

Patrick J. Michaels is a senior fellow with the CO2 Coalition in Arlington, Va. and the Competitive Enterprise Institute in Washington, D.C. He wrote this for InsideSources.com.