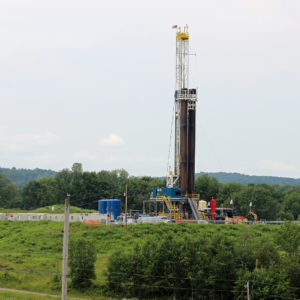 When is a spill a spill? And does the answer depend on where it is? Under American law, many areas of environmental regulation fall to the states. One of these pertains to spills of oil or other fracking chemicals at drilling sites or pipelines. Under federal law, the Environmental Protection Agency can require reports only of spills “to navigable waters or adjoining shorelines.” The amount spilled is not defined by volume, but rather by if it causes a sheen on the surface of the water. In absence of navigable waterways, spills fall under state regulations, though. A recent minor leak at the Dakota Access Pipeline shows the impact that different reporting requirements can have. In short, a leak in South Dakota, might not have been reported in North Dakota.

At the end of March, North Dakota passed a law ending the reporting requirements for all contained spills of less than 10 barrels, or 420 gallons. State Rep. Roscoe Streyle, who introduced the bill, hoped that it would help put into perspective how few spills have an environmental impact. Lawmakers said that well pads are designed to contain far more than 420 gallons and the new reporting requirements would give regulators more time to focus on serious spills.

“North Dakota has a problem with the way it reports oil industry spills,” wrote area political commentator Rob Port. “Lots and lots of tiny, contained spills are documented by the state and the inclusion of that data in statistical analysis can lead to a false impression about the environmental impacts of oil and gas development in our state.”

Port wrote that out of the 1,546 spills reported in North Dakota during 2016, 58 percent, or 907 were of 10 barrels or less. Additionally, nearly 77 percent of all reported spills in the state were entirely contained on the well pad and had “pretty much zero environmental impact,” Port said.

The bill’s proponents said changing reporting requirements would focus the government’s responses on spills that threatened public health and safety.

“It will make government more efficient by focusing resources on spills that pose a threat to health, safety and the environment,” said Rep. Dick Anderson.

Across the border, though, legislation is different. South Dakota law requires reporting if any of several conditions, including a visible sheen or a discharge of over 25 gallons, is met. As a result, a reported spill in South Dakota might not be considered such in North Dakota.

The definition of spill is back in headlines after Energy Transfer Partners, the company that owns and operates the Dakota Access Pipeline, reported a leak of 84 gallons of oil at a pump station just south of Crandon, S.D. The spill occurred on April 4 and was properly reported to the South Dakota Department of Environment and Natural Resources, which added the report to its database, but did not otherwise draw attention to it.

The spill occurred at a pump station, where oil is removed from the pipeline for temporary storage in a surge tank. A secondary pump is used to pump the oil back into the pipeline. This surge pump was the site of the leak.  According to a scientist with the agency, the Department of Environment and Natural Resources generally does not issue a news release about a spill unless there is a a threat to public health, a fishery, or a drinking water system.

Brian Walsh, an environmental scientist who works on groundwater for the department, told the Dallas Morning News that the leak itself was relatively minor.

“Size-wise, an 84-gallon release is pretty small relative to a lot of other things we work on,” Walsh said. “I would characterize it as a small operational spill that was cleaned up right away.”

Under North Dakota reporting requirements, the company would still be responsible for cleaning up the spill, but would not need to submit a report to the state.

Energy Transfer Partners has yet to release an official statement about the spill. In the meantime, some analysts and opponents of the project have expressed concern that even a small leak now, when the pipeline is not yet running at full capacity, might foretell more serious problems in the future.

“It shouldn’t happen, but if it did happen, at least it happened in the pump station. They need to figure out why this happened,” said Richard B. Kuprewicz, a pipeline infrastructure expert and incident investigator, told the Watertown Public Opinion.

“This is what we have said all along: oil pipelines leak and spill,” he said. “Our lawsuit challenging this dangerous project is ongoing and it’s more important than ever for the court to step in and halt additional accidents before they happen – not just for the Standing Rock Sioux Tribe and our resources but for the 17 million people whose drinking water is at risk.”

Archambault also predicted that, given the length of the pipeline, spills would continue to happen.

Earthjustice, an nonprofit environmental legal group, is pursuing a case on behalf of the tribe in hopes of stopping the pipeline from reaching full operation. A second lawsuit, brought by the Cheyenne River Sioux on freedom of religion grounds, was dropped several weeks ago.