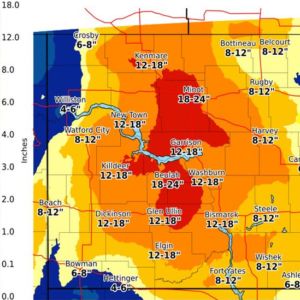 DAPL Protests Continue Over Thanksgiving, but Looming Storm May Force Them Out

While Americans across the country sat down to turkey dinners and football, in North Dakota, activists used the holiday to force encounters with law enforcement and to bring the protest outside of the boundaries of the camp and into the towns of Bismarck and Mandan. In the face of orders from the governor of North Dakota and the Army Corps of Engineers ordering them to prepare to vacate the protest site, the activists instead hurled insults and vowed to remain.

On the Friday after Thanksgiving, hundreds of protesters moved into Bismarck mall, where 33 of them were later arrested after trying to block the interior entrance to a Target store. Although the protesters claimed that they were forming a prayer circle, the Kirkwood Mall management said that neither protest nor open prayer was allowed and asked the group to leave or face arrest.

“Kirkwood Mall is a privately owned space, and we wanted to protect our shoppers and make sure the operations of the shopping center are upheld,” said mall spokeswoman Sarah Kotelnicki. “We have a lot of faith in our law enforcement, and they did exactly what they are here to do.”

Friday’s protest was a continuation of a broader trend. For the past several weeks, the protesters have been travelling into Bismarck and Mandan to protest downtown. Their marches have frequently closed streets and interfere with everyday life for locals. At present, law enforcement advises area residents to avoid driving on streets where protests are taking place. The Mandan police department has begun sending residents automatic phone calls to warn of ongoing protest activity.

Although they continue to receive strong local support, the local police and sheriff departments have been the subject of harsh online abuse. Over the weekend, the Morton County Sheriff’s Facebook page went offline shortly after a post wishing the community a happy holiday. It appears that the account has been deleted, perhaps because of the many antagonistic comments posted by protest supporters. The page had been one of the primary means for law enforcement to show another side of the protests and to highlight the difficulty of maintaining order.

The end of the protest may be in sight, however. In a letter to tribal Chairman Archambault on Friday, the head of the Army Corps of Engineers announced that the land north of the river would be closed to public use and access starting December 5 in order to prevent violence between protesters and law enforcement, and “to prevent death, illness, or serious injury to inhabitants of encampments due to the harsh North Dakota winter.”

Anyone remaining on the government land after December 5, would be considered to be trespassing. The Army Corps letter did not specifically mention who would enforce the order, and protesters have vowed that they would remain. This led North Dakota Gov. Jack Dalrymple to issue his own mandatory emergency evacuation order.

“The general public is hereby notified that emergency services probably will not be available under current winter conditions,” Dalrymple wrote. “Any person who chooses to enter, re-enter or stay in the evacuation does so at their own risk and assumes any and all corresponding liabilities for their unlawful presence and occupation of the evacuation area.”

Dalrymple cited concerns over how the temporary settlement would fare during the harsh North Dakota winter. A state spokeswoman explained that the emergency evacuation order gives the governor additional executive capabilities, including the ability to choose not to provide emergency services to those who remain.

In the end, Mother Nature may be more effective than either order. Central and western North Dakota were placed under a winter storm advisory over the weekend and into Tuesday. The National Weather Service predicts that the storm will blanket the area around Bismarck with over a foot of snow. Despite efforts on site to construct permanent structures, most protesters are still living in tents and many will likely leave as the temperatures drop.