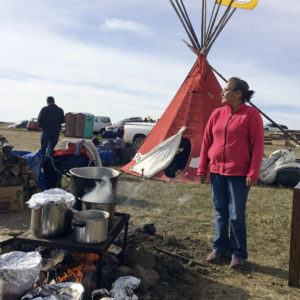 There are presently around 3,000 protesters occupying six camps near where the Dakota Access Pipeline will cross the Missouri River. As the seasons change, some have opted to go home, but others have stayed and are beginning to construct shelters in preparation for winter. It’s a sign that they intend to wait out the winter. According to industry officials, though, the pipeline itself is all but built and continued protest is unlikely to be effective.

“This thing is going to get approved,” said Brigham McCown, former acting administrator of the Department of Transportation’s Pipeline and Hazardous Materials Safety Administration. The project has already received permits from each of the several states it passes through. All that remains is a final easement of about 540 feet on each side of the river. The Army Corps of Engineers has twice defended its approval process for the section in courts, and the courts have agreed construction should continue. But earlier this week, the Corps announced it wanted to halt construction while doing further analysis.

Without this final approval, construction on this section of the pipeline is paused, and in the meantime, those who remain, face a fierce foe in the weather. North Dakota gets cold in November. Around Thanksgiving, night time temperatures start to dip into the mid 20s and clouds threaten to dump a mix of freezing rain and snow.

It makes for poor camping, and it has already led DAPL pipeline protesters to begin erecting permanent structures. For McCown and Spider Marks, who both represent a pro-infrastructure industry group, the continuation of the protests is a threat to the health and safety of both protesters and residents.

For Marks, a retired U.S. Army general who now works as a security adviser for the project, arriving in North Dakota for his first visit to the pipeline protest site brought back memories of his experiences being deployed to Iraq. Describing the scene of burned vehicles and numerous security checkpoints, he said that “the similarities are stark.”

“It’s very frustrating, having spent my life defending freedom to see the protesters behaving like this,” he said during a call on Wednesday.

“As long as this sort of thing continues, we are endangering people’s health,” he continued. As the weather dips colder, many of the protesters will opt to leave, he acknowledged. However, for those who remain, surviving winter weather without permanent shelter will be difficult.

McCown agreed and said that in addition to the risk to the health of the protesters, attempts to stop the pipeline would undermine environmental safety.

“There is no safer way to move this oil than by pipeline,” he said. When it comes to human health and property damage, he is correct. Pipelines pose much less of a risk to human health than transporting oil by truck, which is the current method of getting North Dakota crude to refineries.

For as long as the issue is unresolved, the protests themselves will spark heated interactions between law enforcement and protesters, raising the threat of violence. Meanwhile, a legally conducted business enterprise, which has received all necessary permits and passed numerous safety inspections, is stymied.

According to the two men, in the end, the issue is one of politics, not safety.

“There is no compelling engineering reason not to finish construction,” said McCown. And yet, for the moment, the work has stopped, awaiting a change of policy in January.