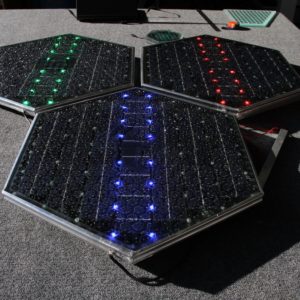 A Dark Road Ahead for Solar Roadways?

Highways and interstates are a quintessential part of America’s landscape and culture. The U.S. interstate highway system alone includes 47,000 miles of roads. That’s a lot of asphalt and concrete. In 2006, one company, Solar Roadways, looked at America’s roads and saw an opportunity for solar energy. It planned a super-durable solar panel engineered to withstand the wear of vehicular traffic and make use of the land already dedicated to transit. Solar Roadways received grants from the Department of Transportation to study the idea and also successfully self-promoted through a crowdfunding campaign that raised more than $2.2 million.

But on Tuesday, a Reddit post blasted the company for “sucking up over $2 million in public funding” and disappearing. The post linked to Solar Roadways’ website, which displayed a generic error page. The site briefly returned on Wednesday night but was down again by the next morning. Solar Roadways has not disappeared, but the events show the long and difficult road from idea to implementation. In the world of solar energy, many companies are unable to make the transition, either going bankrupt or closing.

Solar Roadways describes itself as a “modular paving system” durable enough to withstand up to 250,000 pounds of weight. The company paints a glowing picture of a future world where solar roadways not only power the country, they also heat themselves (doing away with the need for snow plows), and shine LED lights to help drivers see road lines.

Last year, panels were installed in the town square of Sandpoint, Idaho in the first public test of the technology in the U.S. The Idaho experiment showed the limitations of the technology. Solar Roadways installed 30 hexagonal tiles equipped with flashing LED lights. When installed, they didn’t work at first, since the company admitted to some manufacturing equipment failures.

Even so, the small scale installation shows the difficulties of making this novel approach to solar panels feasible. The set of thirty solar panels that Solar Roadways installed in Sandpoint were predicted to produce 5.28 kilowatt-hours of electricity daily. At that rate, it would take 170 panels to fully power a single household. These panels would cover an area of about 745 square feet altogether, though areas with consistently bright sunlight would likely need less space. While America’s roads in theory provide a large area of space that could be utilized for power generation, implementing the idea posed challenges of its own.

Critics of the technology had stated for years that it was impractical. A piece on the tech blog Extreme Tech worked out that to cover all of American highways with solar panels would cost $56 trillion. Even more limited applications of the technology would encounter certain limitations. For instance, the effectiveness of the solar panels diminishes if they become dirty. To combat this problem, Solar Roads had proposed using self-cleaning glass, which uses oleo- and hydrophobic materials to ensure that dirt and water don’t stick. This has the potential to make road surfaces slippery for cars.

Another hurdle for solar road proponents to overcome is the decentralized oversight of American roads and streets. Three separate levels of government are responsible for building and maintaining roads. Persuading all of them to do so would be a lobbying victory of mythic scale. In another sense, though this fragmentation offers Solar Roadways an opportunity: a single town could be more easily persuaded to adopt the technology than an entire state or the Federal Highway Administration.

Over the summer, Solar Roadways announced another prototype for the city of Baltimore. The city has yet to announce additional details about the project.

Even with the planned prototypes, unveiling solar panel roads on a cost-effective scale is still far in the future. The disappearance of the Solar Roadways website drew attention to the research time and money that solar technology still needs before great ideas can become working products. The story is also an example of the extreme volatility of the solar energy market. Although solar panel installations in the U.S. set records in 2016, it was also a difficult period for domestic manufacturers who were forced to compete with cheaper products assembled overseas. While exciting to consumers, implementing the technology on a large scale continues to present difficulties.