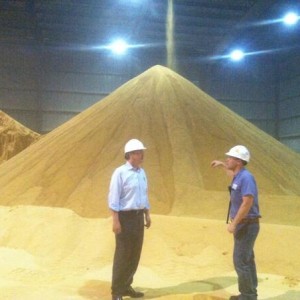 David Young spent two decades on the Hill, working as a top aide to three U.S. Senators—Hank Brown, Jim Bunning, and Chuck Grassley. During that time, he had issue portfolios that focused on technology and energy. From the Telecom Act of 1996 to more recent debates over wind energy and biofuels, he has been advising policymakers.

David is now running for Congress to replace Rep. Tom Latham in Iowa’s Third Congressional District. He sat down with InsideSources for our inaugural interview.

Editor’s Note: This interview was conducted prior to the Administration’s delay in the Keystone decision and the FCC’s announcement of new net neutrality rules.

INSIDESOURCES: Energy issues are closely followed in Iowa. The state has a great interest in debates over wind energy and biofuels. But many question the success of both industries. They have benefited from large federal subsidies.

Focusing on wind first—since the expiration of the wind PTC, how is Iowa’s wind industry performing?

DAVID YOUNG: The industry has suffered in the sense that they need certainty. They would like to see permanence and a little bit longer extension so they can plan more than two or three years out. Across the corporate tax code, there’s a lot of patchwork. This is no exception. If we made it more long term and added certainty, they would flourish much faster because that uncertainty causes businesses to sit back and watch as they wonder whether the PTC will be reauthorized.

And the wind industry is doing great in Iowa. I think 25% of our power on the grid is from wind. And if you’ve driven through Iowa, you know how important wind is to our state. For some families who take summer vacation driving through our state, they’ve probably never seen anything like that before. There’s something very serene about it.

[IS]: Do you believe Congress should reinstate the credit?

YOUNG: Because of public policy and energy goals, I think there is a role there for government to play in getting industries up and running, such as wind. I don’t believe it should last forever. And I believe we need to find a consensus between industry and determine at what point they believe they can be self-sufficient—whether that be a glide path of 5 years, 7 years, 10 years—because I believe at some point they can become self-sustaining. And the industry wants us to do that. They’ve been out there saying we’d like to be self-sufficient. We think we can. We just need a little certainty here so we can have a glide path off it, but don’t cut us off on a cliff all of a sudden.

[IS]: The subsidy has lasted 20 years, and before it ended, wind was producing 60,000 megawatts of generation in the U.S., and had more newly constructed generation than natural gas. Is that a sign of a mature industry?

YOUNG: If it’s fully mature, I don’t know. It’s maturing though, and I think it can do better.

[IS]: Turning to ethanol, which is another Iowa industry that grew through significant government support–the ethanol tax credit expired over two years ago, but the Renewable Fuel Standard still creates a distortion of the demand curve for corn. And just recently, the President called for $200 million in tax credits to support corn ethanol blender pumps. Does the ethanol industry need this continued support?

YOUNG: I think it does. Consumers are liking what they see at the pump when they see a choice between ethanol and petroleum products. They like that choice. That competition is helping drive down the costs to consumers, putting more money in the pockets of families.

The biofuels industry in Iowa—that’s 60,000 jobs right there. That could grow. To Iowa’s economy—it’s about $5.5 billion per year in Iowa’s GDP. That’s one reason why Iowa’s unemployment rate and economy is doing well. I think we’re at 4.2% unemployment rate, and the agricultural economy is very helpful in keeping that number low.

Now the EPA is messing around with the RFS, and we need to get that back in Congress’ hands.

[IS]: Moving away from renewables to two hot button energy issues–do you believe the Keystone pipeline should be approved?

YOUNG: I do. The State Department has done their review and said there won’t be any major environmental impact, and I’ve met manufacturers in western Iowa who are ready to go to work on this. We’ve got a lot of trailer manufacturers who haul some pretty big pieces of equipment. They can haul that pipeline, and they say if this gets approved they will hire more drivers and build more trailers—and there are many other service jobs to be added to the economy as a result.

[IS]: The Obama administration is moving very slowly on approval for natural gas export terminals. Should Congress act to speed the process?

YOUNG: Congress should act in an oversight role to get a timeline of when this can be done and determine whether the administration is serious about it. If there looks to be a realistic timetable where the Administration will give a yea or nay or show that there’s movement, then we should wait on that if it’s in the near term. But if they’re looking long term, then we may need to take a second look—have hearings on it and do the proper oversight.

[IS]: Moving now to some issues in technology policy—

The Commerce Department recently acted to transition away from its oversight of ICANN. Do you support this decision?

YOUNG: It depends on where they’re moving it to. I wouldn’t want to see it move to the United Nations or any kind of world government. I’d like to keep it right here within our federal government and let the United States make those decisions.

[IS]: If it was clear ICANN oversight was going to an international body or an organization that may have too much input from governments that are not as free as ours. Do you believe in that situation that Congress should act to force the Commerce Department to maintain oversight?

[IS]: Are there safeguards that could be put in place that would make this transition more viable? If we knew specifically that ICANN would transition to an organization that would stay free of the influence of non-democracies—do you then think we should transfer oversight?

YOUNG: I would still like to keep it in the Commerce Department. I don’t know what those safeguards would be, who would be making them, or who they’d be held accountable to.

[IS]: The authority of the FCC to enforce net neutrality has been called into doubt by recent court cases, though there are ongoing efforts by the FCC to reassert its regulatory authority. Do you believe Congress should act one way or another to settle these regulatory questions?

YOUNG: I do. Congress has given too much authority to the FCC on issues. Congress needs to retain that authority. There are real policy implications. Legislators should address this because there is a real divide out there, not only with Congress, but I believe with the American people, as well.

[IS]: Thinking back to all the technology issues that you addressed during your years on the Hill, and looking ahead to the challenges that may confront our country today, what are the top actions that you believe Congress should take to ensure that America continues to drive innovation worldwide?

YOUNG: I don’t know that it’s Congress necessarily, but in a lot of rural states, like Iowa, there are a lot of unserved or underserved areas. And I think we need to find ways to make sure that America is wired up to empower education, business, and communication.

I think it would really help out our economy if we brought access to underserved areas in rural Iowa where people may want to start a business. They’re often forced to move out of their communities and into a higher-density population area where they have all those amenities for broadband and wireless networks.

There are things happening in the states. In Iowa, they’re debating broadband access. So I don’t think this always needs to involve federal action, but I think overall, we need to make sure folks have access—because I think that is opportunity.