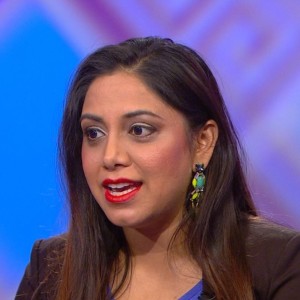 Rina Shah Bharara is one of 16 elected delegates to the Republican National Convention. (Photo via PBS' To the Contrary on Facebook)
News

If the #NeverTrump movement needed a poster girl, it couldn’t do much better than Rina Shah Bharara.

For years, the 32-year-old political strategist has worked full-time for the GOP, both on Capitol Hill and as a consultant. She regularly brings her right-of-center politics to a national television audience as a PBS panelist. Last month, she was the second highest vote-getter of 16 District of Columbia delegates elected to the Republican National Convention.

But as Shah Bharara heads toward Cleveland, she’s ready to do everything in her power to prevent her party’s front-runner from emerging as its White House candidate. If he does, she’s committed to something even more drastic: a general election vote for likely Democratic presidential nominee Hillary Clinton.

“I would vote for Hillary in that case, because I just think [Trump] is so dangerous,” Shah Bharara told InsideSources. “It would be just too dangerous to let that man have the Oval Office. Just too dangerous.”

As a daughter of immigrants from India by way of Uganda, the millennial strategist identified as “Hindu/Jain” and said she’s been working to make the Republican Party more inclusive. She’s urged the GOP to embrace same-sex marriage and the reality of climate change, content to be a “change agent” from within.

But this election cycle, having grown up with Muslim relatives, Shah Bharara has been horrified by Trump’s proposal to ban all members of their faith from the United States. She supported Florida Sen. Marco Rubio before he dropped out of the race, and plans to fight for an anti-Trump nominee — ideally Speaker of the House Paul Ryan, who says he isn’t running — at the convention.

What she said she won’t do is back a man she called “evil,” “an idiot,” “a snake oil salesman” and “a con artist” — especially after reporting racially charged run-ins with his supporters. “These are deranged people,” Shah Bharara said of Trump backers. “I’m going to go ahead and paint it with a broad brush.”

She even speculated that she may not be the only delegate who would ultimately cross over and vote for Clinton. “My sense is that, yeah, there probably are a couple in the bunch,” she said, referring to her District delegation. “I wouldn’t be surprised.”

For now, though, Shah Bharara is an outlier, even in a delegation like D.C.’s, pledged entirely to Rubio and Ohio Gov. John Kasich for the convention’s first ballot. (Delegates are free to back any candidate they choose if the nomination fight goes to a second ballot, which is why campaigns are already lobbying the delegations.)

Maureen Blum, another D.C. delegate, told InsideSources she respects Shah Bharara’s decision about Clinton, but “would respectfully ask that she just didn’t vote [in the general election].”

Shah Bharara said that might be her plan if the nominee is Texas Sen. Ted Cruz, who she can’t stand much more than Trump. “It’s a pick between evil or more evil,” she said of the two candidates.

Opposition to Trump is widespread in the District delegation, which includes several openly gay members, many women and people of color. The division, at least for now, appears to be between a #NeverTrump faction ruling out support for the front-runner and a group still remaining open to it.

Kris Hammond is in the #NeverTrump cohort, open to choosing Cruz, Kasich, Rubio, Ryan or even someone else on the second ballot. He told InsideSources he’s expecting major drama in Cleveland, regardless of who prevails.

“I mean, theoretically, if Donald Trump is not the nominee after the second ballot, he and his delegates [could] walk out of the convention,” Hammond said. “I believe someone’s going to be walking out of that convention, either Trump supporters or anti-Trump opponents. … I think that’s a foregone conclusion.”

Teri Galvez probably won’t be walking out. She’s a Rubio booster who told InsideSources she feels like she can’t support Trump at the convention, but said, “If he becomes the nominee, I guess I’d have to.”

Still, it would be difficult for a daughter of Mexican immigrants, including a father who came to America as a guest worker. More than Trump’s comments about Mexicans, she’s put off by his statements on women.

“I believe in the eleventh commandment from Ronald Reagan, ‘Thou shalt not speak ill of a fellow Republican,’ but I just really don’t like him,” Galvez said. She ultimately concluded that she might write in another candidate for the general election. In the meantime, she’s also open to Cruz, Kasich, Ryan or others in Cleveland.

For her part, Blum isn’t willing to rule out voting for Trump at the convention. She’s “100 percent committed to Senator Rubio” but keeping an open mind about everyone else as well.

“I have had a lot of fall-on-my-sword votes as a Republican,” she said, arguing that any GOP nominee would be better than Clinton.

A veteran of multiple Republican conventions, she expressed resentment about how Trump supporters are being treated as though they should be ignored or discredited. Her message to frustrated anti-Trump Republicans is simple: “If you don’t want to be a part of the party, then get the hell out. Either work inside to make it what you want it to be, to the best it can be, or get out.”

The Republican National Convention is scheduled for July 18-21 at Cleveland’s Quicken Loans Arena.

Some Kasich supporters agreed to join the Ohio governor’s slate despite their genuine preference for Rubio. The elected delegates will be joined by appointed delegates José Cunningham, Bob Kabel and Jill Homan.