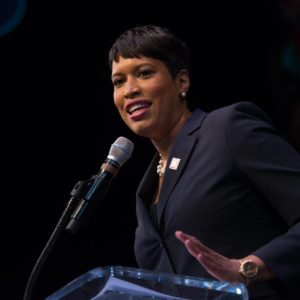 On this year’s presidential primary calendar, last really is least.

Washington, D.C., will hold the final election in the Democratic race between Hillary Clinton and Bernie Sanders next Tuesday, but it’ll be a wholly inconsequential contest now that Clinton has clinched the nomination.

At a District campaign event for the former secretary of state on Tuesday, D.C. Mayor Muriel Bowser told InsideSources she wished local Democrats had gotten to weigh in on the White House race sooner.

In future years, she’d like to see their presidential vote moved up, and separated from other local primary elections.

“I think that’s going to be for the [D.C.] Council to figure out,” Bowser said, acknowledging the added cost to taxpayers of a stand-alone presidential vote. “It’s a resource issue, but I think it’s one worth addressing.”

As a model, the mayor pointed to previous years when District Democrats cast presidential votes along with neighboring states. The 2008 “Potomac Primary,” for example, included D.C., Maryland and Virginia on Feb. 12.

“I did think that the buzz about having us all together made a lot of sense,” Bowser said.

D.C. leaders have been experimenting with different primary dates for half a decade now. Part of the goal is increased voter turnout, which has dropped to record lows.

It’s hard to imagine the presidential race driving much turnout next week, but a defiant Sanders is vowing to fight on in the District.

“We are going to fight hard to win the primary in Washington, D.C.,” he told supporters on Tuesday in California, where Clinton handed him a decisive defeat. “And then we take our fight for social, economic, racial and environmental justice to Philadelphia,” where the Democratic National Convention will be held next month.

Sanders has scheduled a D.C. rally on Thursday, the same day he’ll be meeting with President Barack Obama at the White House.

In a Tuesday statement, the White House said Sanders requested this huddle with the president “to continue their conversation about the significant issues at stake in this election that matter most to America’s working families.”

Amid growing calls for the Vermont senator to concede to Clinton, the statement specified that Obama looks forward to talking with him “about how to build on the extraordinary work he has done to engage millions of Democratic voters, and to build on that enthusiasm in the weeks and months ahead.”

The Clinton campaign is expecting to do well in the District, where Bowser and the vast majority of the local political establishment has endorsed her. The three Council members who haven’t are Anita Bonds, who stays neutral as party chair, and the self-styled progressive independents David Grosso and Elissa Silverman.

In her conversation with InsideSources, Bowser stressed that she wants people to get out and vote for Clinton as well as the six Council races on the ballot. The Clinton campaign also encouraged its District supporters on Facebook on Tuesday, posting “Hey, Washington, D.C. — if you’re with Hillary, she’s counting on you to vote.”