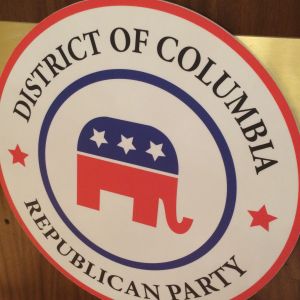 Call it the establishment striking back.

Rubio won with 37.3 percent of the vote, followed by Ohio Gov. John Kasich with 35.54 and Trump, the billionaire business mogul, with 13.77. Texas Sen. Ted Cruz, who has famously alienated official Washington, finished last of the four with 12.36.

“It’s not surprising. In D.C. they want presidential candidates with clear policy proposals and experience,” D.C. Republican Party Executive Director Patrick Mara told reporters after results were announced. “Other than that, I guess, yeah, they’re establishment.”

A total of 2,839 Republicans voted at the primary’s single precinct, the luxury Loews Madison Hotel just blocks from the White House. That’s about 10 percent of the 27,000 D.C. residents registered with the GOP in a city of more than 600,000. Some waited for over three hours to vote, standing in a line stretching for blocks toward 1600 Pennsylvania Avenue.

“It shows how significant this election is,” Mara said.

The primary capped 24 hours that saw two frightening episodes at Trump rallies. The mogul’s supporters and protesters clashed violently on Friday at a Chicago event Trump skipped at the last minute. Then on Saturday, a man rushed the stage before being subdued by security at an Ohio campaign stop. Many of Trump’s critics, including his fellow GOP candidates, said he bears responsibility for inciting these incidents with violent rhetoric.

Saying Trump has attacked all five freedoms guaranteed by the First Amendment, Fratto told InsideSources it’s fair to call the mogul a fascist — and many other choice words. “I think he’s a racist,” Fratto said. “I think he’s bigoted. I think he’s xenophobic. Are there other words I’m missing?”

The sentiment didn’t go over well with Trump supporters.

“I think that’s very extremist,” David Eisen said when asked about the fascism accusations. “In 2004, [some critics said] Bush was a fascist. You can easily throw a term around.”

Eisen, who worked a Trump table wearing a hat with the mogul’s campaign slogan, “Make America Great Again,” told InsideSources he doesn’t blame his candidate for violence at rallies. In fact, he applauded Trump for not attending the Friday event, where he said the scuffles were an organized effort by protesters.

“If there’s going to be people looking for fights and that kind of stuff, looking to drown out the candidate at his own rally, you know, it’s a poor reflection on politics,” Eisen said.

He did acknowledge that Trump attracted violence because “he’s the most controversial” of the White House hopefuls, but said he’s unconcerned.

“He has has rallies that are 10, 20 times the size of everyone else’s rallies,” Eisen said of Trump. “At the end of the day, you’re going to get some bad apples in any bunch. … It’s a sheer numbers game.”

Fratto, unsurprisingly, had a different take, specifically about Chicago.

“I thought it was pretty ugly,” he said. “When you have a candidate that’s out there inciting physical violence between people attending events, that’s what you’re going to see. If he’s not going to take responsibility for it, it’s probably only going to get worse.”

Fratto called Trump “not a guy who’s going to beat [Democratic presidential front-runner] Hillary Clinton” and voiced the objection of many Republicans that the mogul isn’t truly conservative. He said the Republican Party needs to return to its principles of free-market economics and limited government, neither of which Trump represents.

Some of the people it might upset are those Fratto wants to purge from its ranks. He said the GOP, “through a number of election cycles now, has been willing to accept the support of people who only have in common with the Republican Party their hatred of President Obama.” Asked if this hatred was based on the race of the first black president, he said he couldn’t say.

The 19 D.C. GOP delegates will travel to the Republican National Convention in Cleveland, Ohio, July 18-21.