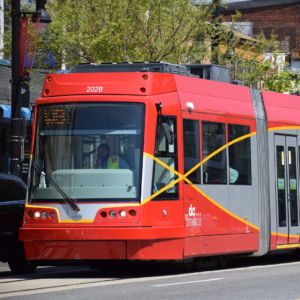 Forty years ago, Washington, D.C.’s commuter streetcars made their final run—until this spring, when Washington D.C.’s latest transit project finally began to carry passengers. When the streetcar wheels of the bloated, over-budget boondoggle finally began to turn, it was nine years after the planned opening date and the cars ran on a much more limited route than anticipated.

As the project slowed, costs bloated, leaving taxpayers footing the bill for a $48.8 million maintenance shed and to shift the route of the train. Now it’s at least operating, but it seems unlikely the streetcar system will ever be able to break even, let alone re-earn its immense construction costs.

Currently, the train runs similar hours to the Washington’s metro system, with newly added Sunday service. In an interview with a local news station this spring, Derek Jones, the Associate Director of Streetcar in Washington said that the city projected between 50,000 and 60,000 monthly riders in the first three months of operation. By the end of the summer, the last period for which data is available, the numbers averaged 71,000 per month.

Right now, these numbers receive a boost from the fact that the streetcar is free to ride. When the new system finally opened, the District Department of Transportation opted not to collect fares. More recently, the department announced that rides will remain free until a change in policy is announced, essentially indefinitely.

The department worries that charging for streetcar rides will lower ridership numbers. Far from an isolated transit area, the H Street corridor in northeastern Washington where the streetcar route runs is already serviced by the X2, one of Washington’s most-ridden bus routes.

If the streetcar is priced higher than the $1.75 it costs to ride the bus, many commuters will likely forgo the novelty and return to their prior transit option. And this fare falls far short of covering the operating costs for the new system.

Running the streetcar along its 1.9 mile route costs $8 million annually. If it were to maintain its current ridership levels and schedule, rides would need to cost about $9.40 each to cover expenses. This would do nothing to touch the $200 million taxpayers spent building the system in the first place. This includes millions of dollars spent building a line to Anacostia, which was eventually abandoned.

Adding insult to injury, the streetcar is also far slower than existing methods of transportation, taking an average of 20 minutes to complete the trip. It’s so slow that in March, an informal group of runners poked fun at the streetcar’s snail-like pace by hosting a weekend “Running of the Streetcar” where they jogged the route trying to beat its time.

Streetcar advocates argue that despite all these hurdles, the new line will gain ridership over time and have proposed extending the line an additional three miles into Georgetown. However, pre-existing systems provide evidence that light-rail and streetcar systems almost always rely on subsidies to continue operation.

Thirty seven US cities run above-ground streetcar or light-rail systems. The most-ridden system is Boston’s, which has a weekly average ridership of 186,200. Compare that to Washington, which boasts a paltry 2,411 rides—and that’s while it’s free.

In Boston, the most popular light-rail market in the northeast, the Massachusetts Bay Transportation Authority had an operating deficit of $98 million in fiscal year 2015. Even with the best ridership numbers in the country, the transit authority lost $1.39 for each ride on the light rail.

It turns out that people don’t like taking the train. The Los Angeles County Metropolitan Transportation Authority, the largest light-rail system in the country, lost more than 10 percent of its riders between 2006 and 2015. The losses came even as the system planned a massive expansion.

While cities around the country grapple with steady or rising operating costs and fewer and fewer riders, Washington officials continue to hold out hope that a streetcar will once again grace the streets of the nation’s capital. And the streetcars glide back and forth, a sleek red beacon of government inefficiency.