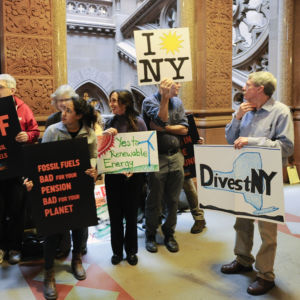 The divestment movement has come to the east coast. On Wednesday, New York City Mayor Bill de Blasio (D) announced that his administration was stepping up to lead the fight against climate change. In a speech on Wednesday, De Blasio announced a federal lawsuit against five oil companies: BP, Chevron, ConocoPhillips, ExxonMobil, and Royal Dutch Shell. He also announced that the city plans to divest its five pension funds from fossil fuels.

“We’re bringing the fight against climate change straight to the fossil fuel companies that knew about its effects and intentionally misled the public to protect their profits,” de Blasio said. “As climate change continues to worsen, it’s up to the fossil fuel companies whose greed put us in this position to shoulder the cost of making New York safer and more resilient.”

Fossil fuel investments total about $5 billion out of the five pension plans’ $189 billion in total investments. De Blasio claims that this would be the largest divestment of its kind, though other cities, including Washington, D.C. and Berlin, have already announced divestment plans.

De Blasio’s announcement raised concerns from both the energy industry and manufactures.

“Instead of focusing on politics, de Blasio should be focusing on his fiduciary duties to the employees of New York. New York City needs to improve the financial situation of its pension plans and the mayor needs to stop playing politics with the retirement funds of police officers, firefighters, and teachers,” said Chris Netram, vice president of tax and domestic economic policy at the National Association of Manufacturers.

Netram said that divestment would be a bad idea even if the pension plans were fully funded. However, the city’s pension funds are already struggling. As annual pension costs are rising to levels that had not been seen since the city faced an economic crisis in the 1970s, de Blasio’s 2018 budget added $9.6 billion in payments to the pension funds. The city’s own reports found that the funding status for the various funds ranges from between 57 percent to less than 70 percent funded, well below the 80 percent funding level that analysts consider healthy.

The lack of money reflects both increasing payouts to retirees and mixed performance from the city’s investment portfolio. City budgets plan on a 7 percent return on investment, which many have called unrealistic. In recent years, the city has been inconsistent in terms of meeting this goal. While the funds closed fiscal year 2017 with returns over 12 percent, the previous year had seen returns of less than 2 percent.

The money that the city pulls out of fossil fuel investments would need to be reinvested and Netram questions if it will be able to get comparable returns. A report released late last year by the Suffolk County Association of Municipal Employees found that, if the state of New York were to divest from fossil fuels, its pension funds would lose $2.8 billion over the next 20 years.

“Given the unique role of the energy sector in the economy, investors that chose to remove traditional energy from their investments reduce the diversification of their portfolios and thereby suffer reduced returns and greater risk. Investor costs are further compounded when considering the additional costs of transactional fees, commissions, and compliance costs that are unavoidable when divesting,” the report said.

“During a period when many pension funds, are underfunded, divestment has real financial implications that jeopardize their the long-term health and solvency,” it concluded.

The report shows that divestment has serious effects on governments’ pension liabilities and, potentially, the incomes of pensioners. Divestment has financial consequences for the city and, so far, has been of questionable efficacy. Despite ever more public pushes for divestment, energy development continues.

In fact, New York remains divided over the best way to advocate for better climate policies. De Blasio and Governor Andrew Cuomo (D) are both working towards divestment. However, the state’s comptroller, Thomas DiNapoli, had previously argued that the state’s pension funds could exercise greater influence over energy companies by staying invested.

“The reality of this proposal is that divestment won’t do anything to cut greenhouse gas emissions,” said Netram. “All it does is result in the passage of stocks from one shareholder to the other. It will not result in the mayor achieving what his stated goals seem to be.”