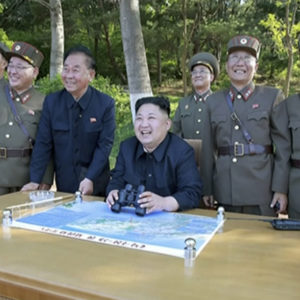 North Korea has launched another long-range missile that may have the range to hit parts of the United States. This development has once again raised alarm bells in the U.S. government and American media. However, since the 1990s, the American foreign policy elite have been long on hysteria and short on solutions from dissuading eccentric North Korean leaders from pairing a nuclear warhead with missile that can travel the long distance to the United States.

One major problem that the U.S. government — infused with the hubris that the American superpower can single-handedly solve all the world’s problems — has is that it lacks empathy for other nations’ situations and perspectives. Yet Napoleon Bonaparte, one of the most aggressive and successful commanders in military history, always tried to put himself in his adversary’s shoes to predict what the enemy would do on the battlefield or the campaign — thus showing that empathy is not wimpy.

If we had put ourselves in North Korean leaders’ shoes over the years, maybe we might have gotten greater insight into their stubborn resistance to giving up their nuclear weapon and missile programs. Simply calling them paranoid, crazy megalomaniacs doesn’t cut it, but that seems to be the analysis of much of the American elite.

Although North Korea, with Joseph Stalin’s nod, attacked South Korea in 1950, the two countries are not as evenly matched now as back then. Then, North Korea, if anything, had the military advantage. Today, although North Korea has a million-man army and vast numbers of artillery tubes that can hit Seoul, South Korea’s capital, just 35 miles from the border with the North, the North’s pathetic communist economy is one-fortieth the size of that of the economic juggernaut that is South Korea.

Also, North Korea’s major benefactor, the Soviet Union, collapsed and has been replaced by a hesitant China — cautious in the Korean dispute because it has such a robust economic relationship with South Korea.

And although South Korea has the economic power to spend much more on its own security, the South has little incentive to do so, given the continuation of its now outdated alliance with the American superpower. Donald Trump was correct in questioning this alliance during his campaign.

And what of U.S. policy toward the North? Over the years, the United States has tried to negotiate away the North’s nuclear and missile programs, it has tried to bribe the regime to get rid of them, and it has also threatened the ostensibly paranoid leadership. All such actions have failed.

One major reason for that failure is that U.S. actions toward other prospective nuclear powers have fed into North Korean fears for regime survival. After the smashing U.S. victory against Iraq in the first Gulf War in 1991, someone asked the top Indian general what he had learned from the conflict. He replied that if you want to keep the United States out, get nuclear weapons. Obviously, North Korea has taken that advice.

North Korea’s determination to get nukes and long-range missiles was likely reinforced by the George W. Bush’s overthrow of the government of non-nuclear Iraq in 2003 and Barack Obama’s similar ouster of the government of non-nuclear Libya in 2011. In the case of Libya, Muammar Gadhafi had even given up his nuclear weapons program and was playing ball with the United States on other issues, such as ending terrorism.

Although signals of Trump administration policy toward North Korea have been muddled, Trump’s implicit threats against the regime are merely reinforcing its historically valid fears. Also, Trump is using the possibility of a trade war with economic sanctions on China as leverage to coerce that nation to pressure North Korea over its nuclear and missile programs.

Yet why does China remain reluctant to put the screws to the erratic North Korean regime? China has condemned North Korean nuclear weapons tests and missile launches, but has not closed its border to trade with the regime; China accounts for 90 percent of the North’s trade, including critical exports of energy to the destitute country. China does not want to see North Korea implode because it fears an influx of refugees. Even more important, the implosion of the North Korean regime and the reunification of the Korean peninsula under South Korea’s rule would put U.S. military forces right on China’s border (a similar situation to the expansion of NATO to Russia’s border, which has contributed to Russia’s recent nationalist and aggressive behavior).

Thus, if the United States looked in the mirror it would see that the Donald Trump of the campaign — rather than the co-opted Trump as president — was right that the Cold War alliance between the United States and South Korea is outdated. Also, it likely has contributed to unfavorable North Korean and Chinese behavior.

Negotiations have failed and military action is likely to be ineffective (not all mobile missile launchers and hardened and buried nuclear facilities would be destroyed) and dangerous (full-scale war on the peninsula eventually would be won but would leave Seoul and much of the South in ruins).

During the Cold War, the United States deterred stronger nuclear powers with the most capable atomic arsenal on the planet — in the 1960s, when China got nuclear weapons, radical Mao Zedong threatened to use them against the United States — and can do so again against Kim Jong-un’s few atomic weapons. In addition, today the United States also has some missile defenses and cyber capabilities to impede the North’s nuclear capabilities.

Therefore, the third option is now the only realistic one left.