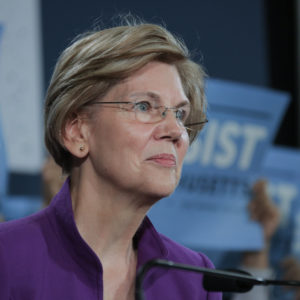 The Heartland Institute wouldn’t normally applaud Sen. Elizabeth Warren, D-Massachusetts, but she deserves credit for calling out the crass cronyism among some of the highest level employees of the federal government. Unfortunately, Warren barely scratched the surface on the audacity of unelected and unaccountable executive agency officials who blatantly abuse their positions of power for their own gain.

In a letter, Warren urged former U.S. Food and Drug Administration commissioner Scott Gottlieb to remove himself from the board of directors of Pfizer, a large pharmaceutical firm and a position Gottlieb joined not even three months after leaving his post atop FDA. Warren implored Gottlieb to resign from his swanky position, calling his hiring a “kind of revolving door influence-peddling (that) smacks of corruption, and makes the American people rightfully cynical and distrustful.”

Although Warren is correct to be alarmed about the former FDA head’s influence and power on behalf of the pharmaceutical giant, she ought to pay attention to the details of this move and its implications for tobacco harm reduction, namely the future of e-cigarettes and vaping devices.

In late 2018, Gottlieb created massive hysteria (and fearmongering) by purporting a “youth vaping epidemic.” Consequently, in 2019, dozens of state legislatures introduced hundreds of proposals aimed to regulate and tax, and in some cases, prohibit the use of e-cigarettes.

As well as being a behemoth in the pharma world, Pfizer also manufactures Chantix, a prescription medication used by smokers as a nicotine replacement therapy (NRT). In other words, Pfizer, which now compensates Gottlieb quite handsomely, makes lots of money on a drug that supposedly helps people quit smoking. Never mind the fact that Chantix’s long list of possible side effects includes “changes in behavior,” seizures, “new or worse heart or blood vessel problems,” and sleepwalking.

In her letter, Warren does not highlight the fact that the former FDA head essentially waged a war on tobacco harm reduction in late 2018 and now works for a pharmaceutical company that just happens to be a direct competitor of e-cigarettes. Perhaps she is unaware Gottlieb’s relationship with NRT began long before his (brief) tenure atop the FDA.

Prior to heading FDA, Gottlieb was a paid consultant for GlaxoSmithKline, another pharmaceutical firm that manufactures NRT products, including Nicorette and NicoDerm. In 2014 and 2015, Gottlieb was generously rewarded with $160,000 by GSK in consulting fees. For what it’s worth, Mitch Zeller, the current director of the Center for Tobacco Products at FDA has also been a paid consultant by GSK, as well.

Even more alarming, U.S. taxpayers are subsidizing several NRT products. Notably, Michigan is offering free NRT, including Nicorette gum and NicoDerm lozenges, until September of this year. The Wolverine State offered similar programs in 2009and 2012. California has also subsidized pharmaceutical companies including GSK and Pfizer in an effort to help smokers quit, with “state-subsidized insurance (that) will pay for two annual courses of treatment with pills such as Chantix and Zyban, Nicorette lozenges, Nicorette gum and NicoDermCQ Patches.”

It is preposterous governments would be so eager to subsidize tobacco harm reduction products because there is significant evidence NRT is not effective at helping smokers quit. One study found “using NRT is no more effective in helping people stop smoking cigarettes in the long-term than trying to quit on one’s own.”

Another study revealed only “6.75 percent of smokers receiving (NRT) attained sustained abstinence for six months.” In 2017, the antichrist of vaping, Stanton Glantz, acknowledged evidence shows “NRT without counseling does not work.”

Perhaps what is most disturbing is the fact that due to Gottlieb’s fearmongering campaign, states and localities are taxing and prohibiting electronic cigarettes and vaping devices. Unfortunately, this comes as substantial research shows traditional herbal products are “twice as effective” as NRT in helping smokers quit. Moreover, e-cigarettes and vaping devices have helped 3 million American adults quit smoking since 2007.

One has to wonder if there even is a youth vaping epidemic. Or could it be possible the former FDA head is simply more interested in protecting companies such as his new employer, Pfizer, from its direct competition: e-cigarettes and vaping devices.

Perhaps the only good that emerges from this sordid affair is the fact that Americans wake up to the astounding cronyism that has engulfed the nation’s capital. It is time to slam shut the revolving door that allows government employees to abuse their power and influence before, during, and especially after they leave office.