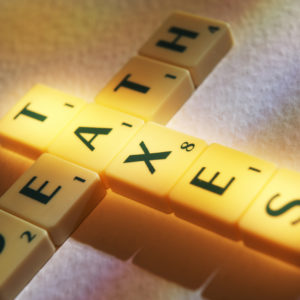 Governments use taxes to do two things: raise revenue and alter people’s behavior. Taxing to raise revenue is painful, but necessary if we want government to do anything at all. Taxing to alter people’s behavior is more controversial. Sin taxes are aimed at reducing alcohol and tobacco consumption by making these things more expensive. In addition to paying for roads, gasoline taxes encourage people to drive less. Some jurisdictions even tax sugary drinks in the name of promoting healthier lifestyles.

Most taxes both raise revenue and perform social engineering to some degree. There is one tax, though, that raises almost no revenue, yet encourages people to behave in counterproductive ways. It is the estate tax, better known as the “death tax.” Proponents dislike the nickname. But earning income triggers the income tax, and selling goods triggers the sales tax. Dying, not owning an estate, triggers this tax, so the nickname is more than appropriate.

Because it generates less than 1 percent of all federal revenues, the death tax is easy to overlook, even for people who inexplicably find taxes interesting. In 2016, only 5,200 households paid it at all. That’s four-thousandths of 1 percent of U.S. households. Given the numbers, it is tempting to declare it No Big Deal and move on. But what makes the death tax dangerous isn’t the paltry revenue it generates, but the behavioral changes it elicits.

When applied, the tax kicks into full gear at a whopping 40 percent, making it one of the most confiscatory taxes the federal government imposes. The apparent good news is that the death tax applies only to estates worth more than $11 million. The bad news is that the tax applies to the market value of assets, not merely to cash. And, where family businesses are concerned, that’s where the tax really does its damage.

A family business can trigger the tax, not because it has millions in cash, but because it has millions in productive capital — real estate, machinery, vehicles, inventory and other assets the business needs to operate. Heirs who inherit a family business often don’t inherit enough cash, and so must sell off productive capital needed to operate the business so as to raise money to pay the tax.

The effect on businesses whose owners have died is bad enough, but the effect on businesses whose owners are still alive is even more insidious. Consider a family business that made a $1 million profit this year. In many cases, the owner would invest that money back into the business, creating more jobs. But the threat of a 40 percent tax upon the owner’s death gives the owner an incentive not to invest in the business, but to withdraw the money from the business and spend it in other ways.

This isn’t a hypothetical. In a study of 1,003 family businesses, more than one-third reported that paying the death tax would require liquidating all or part of their businesses. This study was conducted when the death tax exemption was lower. But today, there are between 10,000 and 40,000 family business ownerswho will likely trigger the death tax when they die. Together, they employ between 25 million and 30 million people. Applying that same one-third fraction to these means that the death tax currently threatens around 10 million U.S. jobs.

No tax is popular with everyone, because every tax represents necessary tradeoffs between the good of individuals and the good of society at large. But of all the taxes governments impose, the death tax is the worst because it achieves almost nothing while imposing a tremendous cost. This was clearly not the intent of the law, but it is the reality. As luck would have it, there is a simple way to fix this problem: Eliminate the death tax entirely. Literally no one would ever miss it.