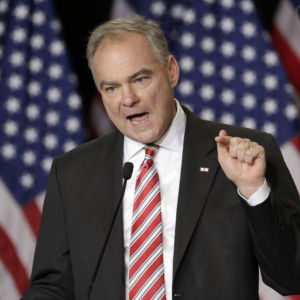 Democratic vice presidential candidate, Sen. Tim Kaine, D-Va., speaks in Wilmington, N.C. With the first presidential debate complete and its spin cycle nearly over, the two understudies are getting ready to take the main stage. The vice presidential debate on Oct. 4, 2016, will be the only time Republican Mike Pence and Kaine will have the nation’s attention all to themselves, away from their much more well-known running mates. (AP Photo/Chuck Burton)
News

The original Willie Horton ad from George H.W. Bush in 1988 is seen as a textbook example of campaigns exploiting racial anxiety, so it wasn’t exactly surprising when various journalists and politicos objected to Spicer. He ultimately deleted his tweet, which would have been an improvement had not an identical one, linking to the very same story, appeared on the official @GOP Twitter feed later in the day. (It has since been removed as well.)

Spicer, it must be said, defended himself, saying correctly that it was Roll Call who characterized his ad as Hortonesque, while he was simply quoting the publication and sharing coverage of his video. Of course, when you simply quote a publication — and link twice to its article — that tends to read to the casual observer an awful lot like an endorsement. Certainly the Washington Post thought so. And Slate. And the Daily Beast. And Politico, NBC and Salon.

It’s hard to argue it was a banner day for Republican high command.

Even on its substance, by the way, the anti-Kaine ad was a risky move, with the potential to backfire. It attacked the Virginia senator on his personal opposition to the death penalty, and for defending clients as a lawyer who would be convicted of rape and murder. These charges, meant to make Kaine look “soft on crime,” are factual, but it’s unclear whether they’d be damning of the senator. Defense attorneys, after all, are supposed to defend unsavory individuals. It’s their job.

Then there’s the fact that Donald Trump has his own sordid past on the death penalty. In 1989, he took out newspaper ads calling for the execution of five black and Latino teenagers who would go to jail for a rape they didn’t commit only to be exonerated later. Trump never apologized.

2016 is also a high-water mark for opponents of capital punishment. As Pew Research reported just last week, “the share of Americans who support the death penalty for people convicted of murder is now at its lowest point in more than four decades.”

In fact, less than half of the United States favors capital punishment for those criminals, and more than four in 10 actively oppose it. Support has dropped a full seven percentage points since March of last year.

Particularly significant for Republicans to consider is what Pew found about swing-voting political independents: “[F]or the first time in decades, independents are as likely to oppose the use of the death penalty (45%) as they are to favor it (44%). The share of independents who support capital punishment has fallen 13 points since last year (from 57%).”

One data point that might help make the case for deploying this issue is this one: “Support for the death penalty among independents who lean toward the GOP is little changed from March 2015 (73% now, 70% then).

Used correctly, it’s possible the topic could help get Republican-leaning independents in the tent, underscoring Trump’s “law and order” messaging. Still, there are clearly minefields here. GOP running mate Mike Pence will have to tread carefully.