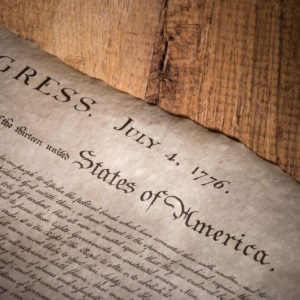 The ‘Declaration of Independence’ Created a Country for Immigrants; What Happened?

I’m a Native American from New Mexico — a Southwestern state with large immigrant and Native communities. When I think about the Declaration of Independence, I have to wonder: Who wrote it, and for what reason?

Thomas Jefferson, along with John Adams and Benjamin Franklin and the rest, were all colonists on a new continent. From the perspective of my people, they were all immigrants. So it wouldn’t be a stretch to say the Declaration of Independence was about creating a humane country for immigrants.

“We hold these truths to be self-evident,” Jefferson wrote, “that all men are created equal, that they are endowed by their Creator with certain unalienable Rights, that among these are the Life, Liberty, and the pursuit of Happiness.”

Those words sound almost perfect, right? Maybe they could be if they actually meant something.

Look at how we’re treating the “unalienable Rights” of immigrants seeking life and liberty today — putting children and families into cages, raiding their workplaces, deporting them en masse. Even though Fox News tells its viewers that immigrant detainment facilities are better than most housing establishments, it’s hard to imagine the Founders treating fellow immigrants of their own stock that way.

I declare to break down the Declaration phrase by phrase.

What truths do we hold? The truth of the matter is the president of the United States is a racist loudmouth, who has lost more employees than the number of “Fast and the Furious” movies because nobody wants to be around him.

He leads with his trigger finger — or Twitter fingers — declaring a new war or repudiation of humanity every day, like when he recently called immigrants “animals” who were “infesting” our country.

What about rights? I have a lot of Native and immigrant friends in New Mexico, Arizona and California who are constantly overlooked or forgotten about — along with their “certain unalienable Rights” that were “endowed by their Creator.” In their place, they get the right to unemployment. The right to a deficient and expensive education. The right to have relatives or themselves in constant fear of deportation or detainment.

These states are supposed to be united. Maybe they are only if you match the color of the people who wrote the Declaration.

As a wealthy country founded by immigrants, we should accept people seeking refuge for their life and liberty so that they can have the pursuit of happiness. Is that not why the Founders came here? To seek refuge and freedom from their king, or from the wars and poverty of Europe?

When you say we are all created equal, make sure to listen to yourself. Don’t persecute people who seek safety and opportunity by separating families, especially mothers from their children. Don’t impose a ban on people because of their religion or appearance. Don’t classify people of color as dangerous when you’re the one pointing the gun.

Of course, I’m not an immigrant. But I identify with many of them. Like many asylum seekers, my people have suffered violence and genocide. And like many kids from immigrant families, I’m a person of color with a mountain of college debt, because our country doesn’t treat education as an “unalienable Right.”

This may sound strange coming from someone whose lineage is a bloody story of genocide and forced assimilation, but I like to learn about history. I want to believe we can do better than the people who came before us, and that we can learn from our past. My people were here before European settlers. But unlike some of their descendants, I still invite people to my home — a little village in New Mexico — to share in the blessings of food, culture and happiness.

It’s been a turbulent 242 years since the Declaration of Independence was signed. Unless we learn to create a more perfect union for all of us — native and immigrant alike — who knows how many more we’ll get?

Derrick Toledo is a New Mexico Fellow at the Institute for Policy Studies.