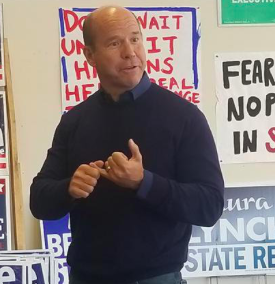 Democratic presidential hopeful John Delaney tells InsideSources that new allegations of suborning perjury against President Trump, if true, will “shut down any kind of normal conversation in Washington” and Special Counsel Bob Mueller should immediately release any evidence that supports those charges.

Buzzfeed news released a story late Thursday claiming that “President Trump personally directed his longtime attorney Michael Cohen to lie to Congress about negotiations to build a Trump Tower in Moscow in order to obscure his involvement.”

“I think the allegations in this story are very, very damaging because they effectively accuse the president of obstructing justice. Telling someone to perjure themselves to the Special Counsel or Congress is perjury, as [President Trump’s] Attorney General nominee Robert Barr said this week,” Delaney said in an interview Friday.

“What I’ve said is, if [Mueller] has evidence to support this charge, he should let the American people know immediately, even if it’s in advance of his final report.  This allegation is effectively going to shut down any kind of normal conversation in Washington.”

“If Mueller has the evidence, he should tell us now,” Delaney said.

Delaney, who represented western Maryland in Congress until leaving office this January to run for president full time, has not been part of the #NeedToImpeach wing of the Democratic Party, instead arguing that no impeachment proceedings should begin until the American people are on board.

“I’ve always viewed impeachment is a political process,” Delaney told InsideSources.  “People often ask me, ‘well, what is an impeachable offense?’   And I always answer by saying it’s whatever two-thirds of the American people believe it is.

Delaney will be in New Hampshire for the weekend, campaigning with young Democrats at a brew pub in Manchester (“I’ll be having a local IPA”) before heading to Concord to participate in the Women’s March on Saturday.  When asked about the controversy swirling around the Women’s March movement (the Concord march is not affiliated with the national Women’s March organization), Delaney said he was bothered by both anti-Semitic comments and the divisiveness of excluding pro-life women’s groups from the cause.

“As a big First Amendment person I strongly support freedom of expression and freedom of religion. I obviously have very serious concerns about anti-Semitism, just like I have concerns over people who get discriminated against for their religious beliefs. People should be free to express their religious beliefs and if their perspective on women’s reproductive freedom is informed by their faith, I understand that. I respect that even if I don’t agree with it. They should certainly have the ability to express their opinion,” Delaney said.

Delaney, who describes himself as a practicing Catholic, also expressed concerns over the treatment of Catholic judicial nominees by some of his fellow Democrats, including potential 2020 competitor Sen. Kamala Harris (D-CA).  He told InsideSources he has “no problem” with the Knights of Columbus as an organization and that he believes judging a nominee based on their religious beliefs is akin to judging them on their race, gender or sexual orientation.

“My Catholicism is important to my wife and me, and to our four daughters. I also tend to be a pretty strong First Amendment person. It’s completely appropriate to ask questions about how people [of faith] will act—that’s fair game,” Delaney said.

“But I absolutely don’t believe that people should be excluded from any position in public service because of their religious beliefs, or the color of their skin, or their sexual orientation, or gender or anything. That’s my very strong view on that topic,” Delaney said.