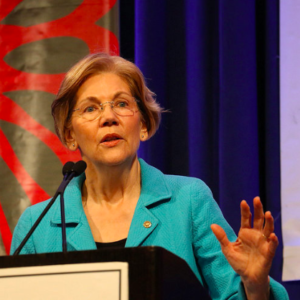 A casino bill to rescue a scandal-plagued multinational’s $450 million bet on a troubled Massachusetts Indian tribe is reportedly being rushed to the House floor without committee review. It’s also missing something else: The public support of high-profile, home-state U.S. Senator Elizabeth Warren.

During the previous session of Congress, Sen. Warren was a vocal supporter and Senate co-sponsor of the Mashpee Wampanoag Tribe Reservation Reaffirmation Act, which would make it possible for the tribe to enter a lucrative casino deal in southeast Massachusetts. Warren’s support for the project, after years of opposition to casino gambling, was widely viewed as part of her effort to repair damage from her Native American heritage scandal.

In the intervening months, however,  the scandals surrounding both Warren and the casino project have only worsened.  The Washington Post unearthed documents from 1986 in which Warren, in her own hand, identified herself as an “American Indian,” and the Mashpee tribe has suffered major shakeups of its leadership over financial concerns.  As a result, Warren is no longer a sponsor of the project and Democrats backing it have decided to take drastic legislative measures.

The scandal surrounding the Mashpee Wampanoag Tribal Nations goes back to corrupt DC lobbyist Jack Abramoff, who represented the Mashpees before being sent to prison on charges of conspiracy, fraud and tax evasion.  Abramoff’s influence in his heyday was due in part to his connections to then-House Natural Resources Committee chairman Rep. Richard W. Pombo.

Who is one of the key lobbyists of the Mashpee tribe today? Former Congressman Richard W. Pombo.

Pombo is part of a well-funded lobbying effort on behalf of a $1 billion casino project between the Mashpees and Genting Malaysia, an international gaming corporation. Genting has been caught up in its own scandal involving a massive kickback scheme that helped bring down the previous Malaysian government.  Genting has spent more than $2 million on lobbyists at the federal level alone since 2016, according to data at OpenSecrets.Org.

Genting and the tribe knew they were taking a gamble on the tribe’s ability to get tribal land for the proposed “First Light” casino given the current status of federal law limiting that right to tribes recognized before 1934. The U.S. Supreme Court upheld the law in the 2009 Carcieri decision, and both the federal courts and the U.S Department of the Interior have ruled against the project as a result.

Meanwhile, Genting spent years loaning money to the tribe against projected future profits casino. According to a 2016 financial audit, the tribe’s gaming authority was $375 million in debt. However, Carlton Hendricks, Jr. of the Mashpee’s tribal council says the actual number is more than $500 million.

Now Genting needs the Mashpee reservation bill to pass in order to recoup their half-billion dollars in losses, and it looks like House Democrats are prepared to do their part.

“We view this as a ‘Hail Mary’ following all the negative decisions for the tribe in court and before the Department of Interior. They’re just reaching out for whatever they can do in Congress to get help dealing with their $440 million hole that they owe to the Genting Group,” says attorney David Tennant, who represented local Taunton, MA families opposed to the project. “We view it as an effort to basically repay a foreign gaming giant as opposed to really helping the tribe.”

While the bill failed to make progress last session, now that Democrats control the House, congressional sources say leadership plans to bring it to a floor vote — perhaps as soon as Monday night — without a committee hearing or mark-up, using the suspension calendar.  Cedric Cromwell, Chairman of the Mashpee Wampanoag Tribal Nation, released a statement telling tribal members he expects the bill to be taken up by the House next week, though the bill hasn’t gone through the committee process.

“Even Jack Abramoff never opened an Indian casino without a markup,” a Capitol Hill source told InsideSources. “Congress is going to open the ‘Liz Warren Indian Casino’ in the dead of night? You can’t make that stuff up.”

Invoking Abramoff is particularly apt because his legacy lives on through the Democrats’ plans.  According to sources, they hope to use support for several Indian bills to cobble together the two-thirds majority support needed to pass legislation under suspension of the rules.  Interestingly, two of the bills in question — the Mashpee casino bill and a bill on behalf of the Alabama-Coushatta Tribe and the Ysleta del Sur Pueblo (AKA the Tigua Tribe) — both involve projects once backed by Abramoff.

Bringing Abramoff-era legislation on behalf of his former clients without full transparency and in a late-night, special-rules vote is raising questions.

“Circumventing regular order to advance these controversial bills directly contradicts the Democrat leadership’s pledge for a fair and open process,” an industry source told InsideSources. “Ironically, this is happening under a Speaker who had accused Republican House leadership of ‘disgracing every pledge of transparency and regular order.'”

Rep. William Keating (D-MA), who represents the Mashpee region in Congress and authored the bill, declined to answer questions regarding accusations of a lack of transparency or reports of a late-night suspension-calendar vote. Instead, he issued a statement:

“I have been working with members across the aisle, with members in both parties on the committee of jurisdiction, and with Democratic leaders in charge of floor action. I feel very positive about the bill’s progress toward a vote.”

“Floor action” being a euphemism for moving the bill on the suspension calendar and avoiding a full committee hearing.

Meanwhile, political observers are asking “Where is Liz Warren?”

After months of attempting to burnish her bona fides in the Native American community, Warren is entirely silent on the Mashpee legislation she previously co-sponsored but refuses to publicly endorse today. Her office declined repeated requests for comment, but sources close to the tribe tell InsideSources that they now see Warren as more of a liability than an asset.

Which makes sense, according to Massachusetts-based GOP political consultant Pat Griffith. “Identity politics has come back to bite her, and now her problem has become the tribe’s problem.”

The House is going to attempt to solve that problem next week. If they succeed, the bill will go to the GOP-controlled U.S. Senate and, theoretically, to the White House where, given its connections to both Sen. Warren and her ongoing heritage issues, it’s unlikely to get a warm welcome.