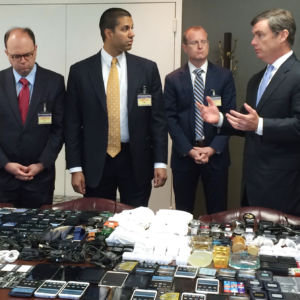 A report by congressional Democrats aimed at discrediting a Republican investigation into potential fraud in the Federal Communications Commission’s low income phone subsidy program overlooked several areas of concern highlighted by an FCC commissioner before drawing its conclusions.

Democrats on the House Energy and Commerce Committee released the report following an FCC oversight hearing in July, when lawmakers put Republican FCC Commissioner Ajit Pai in the hot seat over his ongoing investigation of high duplicate enrollments in Lifeline — the program that distributes a $9.25 monthly subsidy to help low-income Americans pay for phone service.

The program only allows one subsidy per household. Before a telephone service provider can enroll a subscriber, they must submit their application to the the National Lifeline Accountability Database (NLAD). The database flags applicants with the same information as a current subscriber, including address.

In June Pai released the latest results of his investigation finding one-third of all enrollees between October 2014 and April 2016 — 4,291,647 subscribers — were enrolled despite sharing an address with another subscriber. Wireless carriers can approve multiple subscribers with the same address by submitting an Independent Economic Household (IEH) Worksheet to the Universal Service Administrative Company (USAC), the company that administers Lifeline.

USAC will then give carriers permission to override the flag from NLAD. One and a half years of such duplicate enrollments costs $476 million — an amount Pai said is worthy of further scrutiny to ensure carriers aren’t abusing the program for profit, especially after the FCC leveled its largest-ever fine against Lifeline provider Total Call Mobile earlier this year for fraudulently enrolling tens of thousands of subscribers with overrides.

Democrats in their report said Pai’s investigation “relies on incorrect assumptions” by implying every IEH override is fraudulent, discounting the number of subscribers living in multi-household addresses like homeless shelters, veteran group homes, multi-generational residences, and nursing homes. As such, they dismissed Pai’s $476 million in duplicate enrollment costs as “bad data.”

“The recent allegations of fraud in the Lifeline program rely on the broad assumption that every IEH worksheet was fraudulent,” the report reads. “Democratic staff has uncovered no evidence to support this assumption. Indeed, USAC reports that 43 percent of IEH Worksheets filed were submitted in an abundance of caution for subscribers whose information had already been verified.”

Pai shot back at those allegations during a press conference following the FCC’s July open meeting, where he pointed out the report only examines one of five loopholes his office is investigating across 16 carriers nationwide.

USAC reported at least 16 other wireless providers have used similar tactics to Total Call Mobile between October 2014 and May 2015, resulting in 213,283 actual duplicates.

NLAD also doesn’t prevent wireless carriers from requesting subsidies for so-called “phantom subscribers,” or subscribers not enrolled in NLAD, which accounted for 460,032 enrollments.

Carriers can also use Third-Party Independent Verification (TPIV) to approve subscribers, despite the fact that USAC does not have to verify the documents used to authorize the enrollment.

The address override process works the same way — though carriers are supposed to collect documentation to verify subscribers with rural or tribal residencies, for example, carriers know overrides are granted without any oversight. Wireless providers have enrolled almost half a million subscribers through the address override process since October 2015.

“That means that unscrupulous wireless resellers can still override that safeguard even for non-qualifying subscribers,” Pai said. “There are no doubt legitimate uses of these override processes. But when nearly half of Lifeline subscribers are enrolled through an override, it’s a sign that something is up.”

Despite finding “specific allegations of waste, fraud, and abuse using the IEH worksheet are not valid,” Democrats in their own report agreed more should be done to combat potential IEH override fraud.

Just days after the report’s release, the FCC fined Texas-based Blue Jay Wireless for falsely claiming thousands of Lifeline subscribers lived on tribal lands in Hawaii — a designation that allows carriers like Blue Jay to enroll subscribers without address verification, in some cases for an even higher monthly subsidy.

After the announcement, Pai confirmed Blue Jay was one of the subjects of his investigation.

“I will continue to work with my colleagues, the Enforcement Bureau, the Inspector General, and the Universal Service Administrative Company to end the abuse of taxpayer money by unscrupulous wireless resellers,” he said.