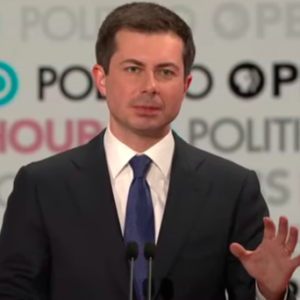 A debate that almost didn’t happen, held on the Thursday before Christmas, in the wake of a rare impeachment vote — the sixth Democratic presidential debate could have been a letdown. Instead, after a slow start, it turned into a sharp-elbowed snark fight, thanks in large part to South Bend, Ind. Mayor Pete Buttigieg.

Only he was catching the elbows, not throwing them.

If you missed Thursday night’s debate, you’re probably wondering why the phrase “wine cave” is cropping up in your social media.  It was the location of a high-dollar fundraiser for Mayor Pete and became a central part of the Democrats’ debate. Sen. Elizabeth Warren called him out for fundraising among the rich in such an elite venue.

“The mayor just recently had a fund-raiser that was held in a wine cave full of crystals and served $900 a bottle wine,” Warren said. “Billionaires in wine caves should not pick the next president of the United States.”

Buttigieg, who was clearly ready for the attack, responded by pointing out that he was “literally the only person on this stage who’s not a millionaire or a billionaire.”

“Senator, your net worth is 100 times mine,” he told Warren, before reminding her that she had done the same high-dollar fundraising during her U.S. Senate campaigns and has transferred $10 million of those dollars into her presidential race.

“Did it corrupt you, senator? Of course not.”

That didn’t stop Warren’s attacks, or Sen. Bernie Sanders, who did a countdown of the number of billionaires who had donated to Joe Biden or Buttigieg’s campaign. (Biden’s in the lead, 44 to 39, according to Sanders). Even millionaire entrepreneur Andrew Yang piled on, pushing his proposal for taxpayer-funded campaign donations so candidates “don’t have to go shake the money tree in the wine cave.”

There were attacks on Mayor Pete’s relative lack of experience from Sen. Amy Klobuchar, the master of what’s known in the midwest as “Minnesota Nice” (the “nice” ends when your back is turned, they say). Klobuchar has had good debate performances in the past, but with little to show for it in the polls. She’s never broken the 4 percent mark in the RealClearPolitics poll average and she’s in fifth place at 6 percent in her neighboring state of Iowa. Klobuchar knows she’s got to get some movement and she showed up ready to shove some of the candidates out of her way.  Starting with Mayor Pete.

She took issue with Buttigieg’s previous comments about the years his competitors in the U.S. Senate have spent in Washington, DC.

“We should have someone heading up this ticket that has actually won and been able to show that they can gather the support that you talked about from moderate Republicans and independents, as well as a fired-up Democratic base,” Klobuchar said. “And not just done it once – I have done it three times.”

Buttigieg tried to defend his modest record as a mayor who’s never gotten more than 11,000 votes by arguing he overcame the challenge of running “as a gay dude in Mike Pence’s Indiana.”

“If you had won in Indiana, that would be one thing. You tried, and you lost by 20 points,” Klobuchar shot back, a reference to Buttigieg’s run for Indiana state treasurer in 2010. (He actually lost by about 25 points.)

The big story of the night for Buttigieg was that he handled the attacks well and ended the debate largely unscathed.  The same cannot be said for America’s billionaires.  They took a beating.

Both Sen. Sanders and Sen. Warren insisted that many of America’s ills were the result of “corruption” by America’s “billionaire class” who were manipulating our democracy and keeping working-class Americans trapped in poverty.

“I do not sell access to my time,” Warren said at one point. “I don’t spend time with millionaires and billionaires. I don’t meet behind closed doors with big-dollar donors.” If she did, apparently, they would use their money to buy our democracy.

Yes, she is. And so is Bernie Sanders.

“We are becoming an oligarchy,” Sanders said. “Where a handful of billionaires spend hundreds of millions of dollars buying elections and politicians. The issue isn’t old or young, male or female. It’s the working people of this country standing up and taking on the billionaire class.”

Billionaires are an easy target. There are only about 600 of them in the entire country. (Kylie Jenner of the Kardashian clan just joined the club earlier this year.)

At the same time, this fact makes it hard to take the Sanders/Warren public policy approach seriously. Relying on 600 people to pay for most of Warren’s multi-trillion dollar government programs doesn’t make much economic sense.  When asked about the economists who point out her massive tax hikes would hurt economic growth, Warren’s answer was, “Well, they’re just wrong!”

And what about Sanders’ claim that billionaires are buying our elections and politicians?  In 2016, Donald Trump was massively outspent by Hillary Clinton and her campaign allies. She was backed by far more billionaires than Trump. What happened?

Did corrupt billionaires elect Barack Obama? Twice? And what about the #BlueWave in 2018? How did the “millionaires and billionaires” let the Republicans lose control of the House?

These are unserious arguments. But on a Democratic primary stage, there’s no benefit to their opponents in confronting them. When the party picks a nominee who has to face Donald Trump, the debate will be very different.