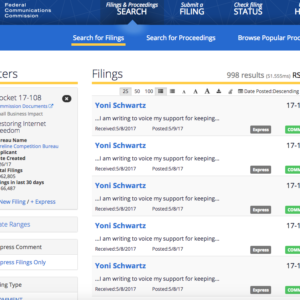 Congressional Democrats are asking the FBI to investigate hundreds of thousands of fake comments submitted to the Federal Communications Commission in support of its plan to repeal net neutrality rules.

New Jersey Rep. Frank Pallone wants Attorney General Jeff Sessions and the FBI to investigate at least 450,000 fake comments, filed since May, supporting a Republican plan to repeal Obama-era net neutrality rules. According to one pro-net neutrality advocacy group, some of those comments were filed using real names and other personal information, likely in violation of federal law.

“This request comes after troubling reports that 14 people recently alerted the FCC that their names and addresses had been used to file net neutrality comments without their knowledge or permission,” the ranking Democrat on House Energy and Commerce Committee wrote Wednesday. “Other reporting suggests that the persons filing these fake comments may be using information obtained from data breaches.”

Pallone referenced a news report from The Verge that showed overlap between personal information hacked and leaked online and that used to file fake comments. He also pointed to a letter from the FCC from the pro-net neutrality group Fight for the Future asking the FCC to investigate fake comments using the information of 14 people ranging from New York to California, and calls attention to other news reports identifying at least 450,000 anti-net neutrality comments using the exact same wording.

“Federal law prohibits knowingly making any materially false statement or representation in any matter within the jurisdiction of the executive, legislative or judicial branch,” Pallone said. “I am deeply concerned that the sheer number of these potentially false comments suggest a coordinated attempt to materially mislead the FCC, and therefore a coordinated attempt to break federal law.”

But Pallone made no mention of the almost half a million fake comments filed in support of the net neutrality rules, and opposed to FCC Chairman Ajit Pai’s plan to undo them.

Fake comments have been pouring in opposing the Republican plan, with one user filing almost 1,000 identical comments supporting the Obama-era rules. Another 2,000 have been filed under the name of HBO “Last Week Tonight” host John Oliver, who used a recent episode to examine the issue and call on average internet users and trolls alike to comment on the proceeding.

According to the National Legal and Policy Center (NLPC), a right-leaning non-profit and self-described “government watchdog,” at least 465,322 pro-net neutrality comments are fake. Of those, multiple email addresses were also pulled from databases posted online and used by spammers and hackers. Some 100,000 used similar language borrowed from a pro-net neutrality group campaign. Others included fake emails, addresses, and possibly names.

“While we agree with Rep. Pallone that there should be an examination of the comments being filed in the FCC’s Restoring Internet Freedom proceeding, we question why he didn’t also include in his letter a request to look at the hundreds of thousands of fake pro-net neutrality comments that we documented earlier this month,” the group said in a statement.

While fake comments have become a growing point of contention between net neutrality advocates and proponents, Pai paid them little mind during a recent press conference.

“Of course this is not new: fake comments were filed in the 2014-15 proceeding under names like Donald Duck, Mickey Mouse, and Stalin, just to name a few,” Pai said after the FCC’s May open meeting. “This time around I think the bottom line is, I urge everyone who’s interested in this issue to participate in the process in an honest and forthright way. And that is, I think, the best way to make sure your voice is heard.”

The impact of fake comments will likely be mitigated by the agency’s rulemaking process. In April, senior FCC officials from Pai’s office said the agency won’t be basing its decision on the number of comments filed for or against the plan, but on the factual and legal reasoning contained within them — a legal requirement of the Administrative Procedure Act the FCC operates under.