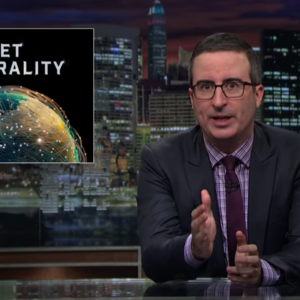 Posted to Technology May 08, 2017 by Giuseppe Macri

Comedian John Oliver of HBO’s ‘Last Week Tonight’ gave his show’s second defense of net neutrality Sunday, offering noteworthy attention to an obscure issue — especially since the response from his first episode on the issue three years ago inundated the Federal Communications Commission’s website with enough comments to crash it. In response to the Trump administration’s plan to scale back the rules, Oliver sounded the same clarion call and even made a convenient link to bypass the agency’s new overly complicated comment filing system, but before the internet’s combined activists and trolls storm the servers, they should take note of a few things Oliver left out.

Oliver begins the segment with a few light jabs at the optics of a terrible PR attempt by Verizon to quell the outrage over the new FCC’s plan (“Why wouldn’t you trust the commitment to open access of a man sitting at a table literally blocking an entire hallway?” Oliver quipped) and Ajit Pai, Trump’s pick to lead the agency who, in all fairness, deserved every knock Oliver gave him for using that ridiculously oversized mug.

“For all of Pai’s doofy, ‘Hey I’m just like you guys’ persona, there are some things about him that you should really know,” Oliver said. “He’s a former lawyer for Verizon.”

This should sound familiar to anyone who saw Oliver’s first piece on net neutrality, because it’s the same criticism he leveled against former President Obama’s then-FCC Chairman Tom Wheeler, who served as a top lobbyist for the cable industry for two decades.

“Yes, the guy who used to run the cable industry’s lobbying arm is now running the agency tasked with regulating it,” Oliver said in 2014. “That is the equivalent of needing a babysitter and hiring a dingo.”

Wheeler of course went on to create the net neutrality rules Oliver is now defending (he later conceded Wheeler is not a dingo). But describing Wheeler as a dingo for his two decades at the top of two of the industry’s biggest lobbying arms makes Pai’s history at Verizon, where he worked for a few years before spending the majority of his career in public service at the Justice Department, Congress, and FCC, like comparing dingos and chihuahuas.

Next Oliver tackles the argument by Pai and others that there was no evidence to warrant the rules barring internet providers from blocking, throttling, and paid prioritization or reclassifying those providers as public utilities. He plays a clip from a PBS interview with Pai to make his point.

“Let’s just say Comcast created a new TV series, and it just so happened that that competed with a Netflix series very similarly. How is there not an incredible incentive for Comcast to slow Netflix down coming into my house, and make the Comcast video very robust?” William Brangham of Newshour asked Pai in April.

Pai said the situation was hypothetical and the FCC doesn’t see any evidence of that happening (Oliver counters that by recalling wireless carriers blocking Google Wallet in 2013 in favor of their own very poorly named proprietary service). But it’s worth remembering that after championing net neutrality as the issue’s poster child for years, it was last year we found out Netflix was throttling its own traffic to AT&T and Verizon mobile customers.

To examine the other reason it’s just a hypothetical, we have to go to another point brought up by Oliver — that despite claims by Pai and the industry, investment in broadband networks has not gone down since the rules were passed. Oliver cites the words of Verizon CFO Francis Shammo to make his point.

“I mean, to be real clear, this does not influence the way we invest,” Shammo told investors on a call in 2014. “I mean, we’re going to continue to invest in our networks and our platforms, both in wireless and wireline Fios and where we need to. So nothing will influence that.”

That’s the same thing Netflix told its investors in January when rumors began circulating of a net neutrality repeal under Trump.

“Weakening of U.S. net neutrality laws, should that occur, is unlikely to materially affect our domestic margins or service quality because we are now popular enough with consumers to keep our relationships with ISPs stable,” Netflix said in a letter to investors.

Even though capital expenditures are down among the largest internet providers in the U.S. (and Oliver’s correct, it is hard to measure the impact of the rules without a counterfactual, which is exactly what another economist did), Pai wasn’t talking about large incumbents but small and rural internet service providers (ISPs).

“And just this week, 22 small ISPs, each of which has about 1,000 broadband customers or fewer, told the FCC that the Title II Order had ‘affected [their] ability to obtain financing.’ They said it had ‘slowed, if not halted, the development and deployment of innovative new offerings which would benefit our customers.’ And they said Title II hung ‘like a black cloud’ over their businesses,” Pai said when he announced his rollback plan in April.

Two weeks ago, the FCC cleared up another claim Oliver made — that Pai was considering letting ISPs pledge to uphold net neutrality principles in their terms of service.

“You know, the things no human being has ever read, and can change whenever companies want them to,” Oliver said. “That idea would basically make net neutrality as binding as a proposal on the bachelor.”

While ISPs are still subject to lawsuits for violating their terms of service agreement with users, a senior FCC official told reporters in April that’s “not the proposal we are putting forward.”