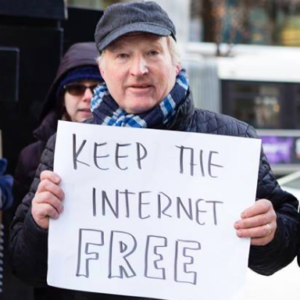 Tuesday’s net neutrality hearing showed Democrats and Republicans are still unwilling to work together on the issue. Both parties spent most of the hearing taking shots at each other rather than discussing ways to regulate the internet effectively.

Rep. Bob Latta (R-Ohio) began his opening statement seemingly miffed that Democrats ignored the net neutrality bill he introduced in February, even though Democrats said from the start they want Title II-based net neutrality rules. Latta’s bill is not based on Title II.

In response to Latta’s bill and two other Republican net neutrality bills, Rep. Mike Doyle, (D-Penn.), introduced the Save the Internet Act last week, which restores the Federal Communications Commission’s 2015 Open Internet Order, based on Title II of the 1934 Communications Act.

“I’m confused why we need to have another hearing about net neutrality when we just had a hearing last month talking about the same thing,” Latta said at the hearing, adding that a Title II-based net neutrality bill “has no chance” of passing because it would have a “devastating effect on broadband investment.”

The net neutrality rules were in effect for a short time, so it is also difficult to understand the data contextually and account for other factors and regulations, like the 2017 Tax Cuts and Jobs Act (TCJA).

In response to Latta, Doyle said Democrats were blindsided by the Republican net neutrality bills.

“When we said we’ve wanted to work together on net neutrality, we ended up getting three bills being dropped without knowing anything about it,” he said. “That’s not a way to work together.”

Rep. Greg Walden (R-Ore.), who also introduced a non-Title II net neutrality bill in February, said in his opening statement, “Unfortunately, my friends on the other side have not decided to work with us on a bipartisan solution and I’m really disappointed. Title II is not necessary to preserve a free and open internet. We could permanently ban blocking, throttling and paid prioritization without the heavy hand of Title II.”

While Democrats and Republicans debated the merits of a Title II-based net neutrality law, witnesses asked for an end to the back-and-forth of net neutrality rules and clear internet regulation.

“People in my hometown don’t care about Democrat or Republican or Title II or net neutrality, what they care about is internet access so they can get jobs and go to college and get out of poverty,” Francella Ochillo, vice president of policy at the National Hispanic Media Coalition testified.  “Thirty-two percent of Latinos from my hometown don’t have broadband access of any kind. When you’re talking about non-English speaking groups, that number goes even higher.”

“The Department of Justice and FTC have at their disposal the full panoply of U.S. antitrust and consumer protection laws to address market failures in the broadband industry should they arise,” McDowell said. “Specifically, the Sherman Act and the Clayton Act would prohibit ISPs from engaging in behavior that harms competition or consumers.”

But Ochillo said Title II-based net neutrality rules strengthen the Lifeline program, which offers discounted internet access for low-income residents who meet certain criteria. Ochillo fears that without net neutrality, there may not be an incentive for ISPs and telcos to offer Lifeline service to those who need it.

Lifeline is “life or death for some of them,” she said. “Sometimes it’s the only way for students to do their homework. Right now it’s the only thing connecting some people to telecom services.”

Rep. Susan Brooks (R-Ind.), who recently co-founded the 5G Caucus with Rep. Debbie Dingell (D-Mich.), agreed that the back-and-forth over net neutrality should end, but none of the House members at the hearing discussed meaningful ways to come to some sort of compromise.

“We need to end the ping-ponging on this issue,” Brooks said. “We have to stop fighting about this. We have to get our act together so we’re not falling behind the rest of the world.”