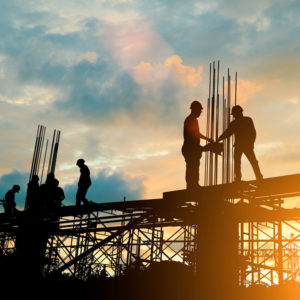 Infrastructure was supposed to be a bridge-building issue–both literally and politically. Running in 2016, President Trump promised that under his leadership, America would reinvest in roads, bridges, and water pipes, laying the foundation for another century of growth. That plan stalled. Now Democrats are picking up the infrastructure issue as part of the “Green New Deal” idea being floated in Congress. And while both sides are talking about infrastructure, major differences in the types of projects they want to build, and how this new construction will be financed, mean the two sides are unlikely to compromise.

Incoming Democrats believe that the president wants an infrastructure proposal to pass and think that they have an opportunity to advance their environmental agenda. Senate Minority Leader Chuck Schumer pledged in a December op-ed that “any infrastructure bill would have to include policies and funding that help transition our country to a clean-energy economy and mitigate the risks the United States already faces from climate change.”

He pointed to a proposal Democrats put forth last year, which would have dedicated $1 trillion to clean energy and climate resiliency projects as part of an effort to transition the country to 100 percent carbon free energy. The plan also proposed $40 billion to connect “all” America to high speed internet, $3 billion for “charging and refueling” stations for electric cars, and $25 billion for mass-transit grants.

Since then, freshman Rep. Alexandria Ocasio-Cortez has attracted public attention for her “Green New Deal” program, which would push for innovation in green energy and improvements in energy efficiency. The details of Ocasio-Cortez’s plan have yet to be finalized–after all, she was only sworn in a week ago–but it has already gained a number of Democratic backers, including Massachusetts Sen. Edward J. Markey (D), who argued in a recent op-ed that infrastructure could not be addressed without also dealing with climate change.

“For every highway, for every energy project, every single dollar needs to be spent with a proper accounting of climate change and resilience. That’s the formula necessary for America to lead the world into the 21st-century green economy,” he said.

These infrastructure proposals are a far cry from the Trump plan, which focused mainly on roads, bridges, and water and sewer.

Another crucial difference between the infrastructure proposals is funding sources. Trump’s proposal attempted to use the promise of federal grant dollars to spur states to reinvest in their infrastructure. This would have been accomplished through a series of grant matching programs meant to push states to start larger projects. After being announced last spring, the proposal has largely stalled.

Trump’s infrastructure plan was billed as the “most comprehensive” and included reforms to cut down the regulatory burden in addition to merely providing federal dollars. It also took an expansive view of “infrastructure,” including proposals to replace America’s aging water and sewer infrastructure. Although less headline-worthy than green energy and new highways, water and sewer systems in many parts of the country were installed a century ago and are reaching the end of their lifespans.

Under the Trump plan, the government would leverage about $200 billion in federal grants to encourage state and local investment in projects that might not otherwise be started. He said that these partnerships would stretch the Federal dollars further.

Researchers from the University of Pennsylvania who examined the proposal earlier this year were skeptical of the trillion dollar figure floated by the administration. They believed that the range of total infrastructure investment could be as little as $20 billion or as much as $230 billion–still far short of the administration’s proposals.

Meanwhile, Democrats have only one way to pay for increased infrastructure spending–more taxes. In a “60 Minutes” interview with Anderson Cooper, Ocasio-Cortez said that her ambitious goals could be covered by tax increases, including rates of  “60 or 70 percent” for top earners.

“What is the problem with trying to push our technological capacities to the furthest extent possible?” she asked. “There’s an element where yeah, people are going to have to start paying their fair share in taxes.”

Through she admits that her goal of ending American reliance on fossil fuels in 12 years is radical, she says that “it only has ever been radicals that have changed this country.”

The trouble, with radicals, compromise is often out of the picture and that could again quash any hopes of passing a new infrastructure bill.