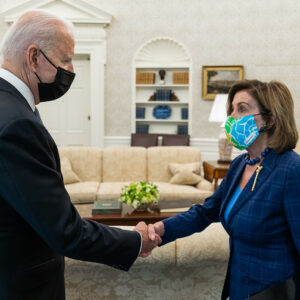 When Joe Biden was running for president, he promised to get things done in Washington. “I’ve been doing this my entire career,” Biden told Politico’s Michael Grunwald. “I’m going to say something outrageous: I don’t know anybody who counts votes better than me in the Senate.”

Nine months after taking office, he’s struggled to deliver. Democrats successfully approved a $1.9 trillion COVID-19 relief package into law back in March, but have accomplished little of note legislatively in the half-year since. The White House rolled out the American Jobs Plan and the American Families Plan back in March and April, respectively, and the $3.5 trillion reconciliation package they morphed into isn’t even fully written yet, let alone passed. The one win from the summer—the Senate’s bipartisan infrastructure deal—is stalled in the House, in large part because Biden publicly linked it with the bigger, more audacious package. And now congressional inaction risks both defaulting on the United States’ debt and shutting down the federal government.

Democrats have a big problem on their hands: Making sure the U.S. maintains its ability to keep doing even the amount of spending Congress has already committed to. That’s become an issue thanks to the recent expiration of a 2019 law that suspended the debt ceiling.

The U.S. has been limping along for weeks via“extraordinary measures”—accounting tricks that allow temporary workarounds. But Treasury Secretary Janet Yellen has warned that, without congressional action, the U.S. will lose its ability to borrow as soon as mid-October.

The House passed legislation Tuesday that would suspend the debt limit until December 2022—and would avert a government shutdown through December 2021. The bill faces long odds in the Senate.

“This could not be simpler,” Senate Minority Leader Mitch McConnell said yesterday. “If [Democrats] want to tax, borrow, and spend historic sums of money without our input, they’ll have to raise the debt limit without our help.”

Democrats are arguing (correctly) that the bulk of the debt this ceiling suspension would address was accrued during the Trump administration. “When we talk about the debt ceiling, we’re not talking about future spending,” House Speaker Nancy Pelosi said at a press conference. “This is to pay the incurred cost..”

Democrats could do it alone. The provision would have to be included in their massive, filibuster-proof reconciliation package.

Late Thursday night, Senate Majority Leader Chuck Schumer teed up a Monday vote on the House-passed bill. But congressional leaders will have to act fast because the government is set to shut down next Thursday.

Meanwhile, congressional Democrats are trying to usher two massive spending bills to President Biden’s desk, and they need essentially every single Democratic senator and House member on board to do it. But the party’s moderate flank prefers the $550 billion bipartisan infrastructure package while its progressive wing favors the $3.5 trillion reconciliation bill. Several members on each side of this divide—enough to matter for final passage—have said they won’t vote for the others’ priority until their own is passed. It’s like a very, very expensive M.C. Escher sketch.

In August, Pelosi got the moderates to support a procedural reconciliation measure in exchange for a promise to vote on the smaller infrastructure package by September 27. Democratic Rep. Josh Gottheimer of New Jersey, firmly in the moderate camp, told CNN this week he was holding Pelosi to her promise. But Democratic Rep. Pramila Jayapal—chair of the Progressive Caucus—indicated this week that more than half of her 96 members stand ready to tank the bipartisan infrastructure bill if the reconciliation package is not ready.

Theoretically, a group of House Republicans could come to the infrastructure deal’s aid and cancel out the progressives’ opposition—but don’t count on it. Despite 19 Republicans voting for the package in the Senate, it has next to no GOP support in the House. House GOP Whip Steve Scalise formally began urging Republicans to oppose the legislation this week, arguing that “a vote for the infrastructure bill paves the way for passage of reconciliation” and that “Republicans should not aid in this destructive process.”

But if the progressives aren’t bluffing, until Democrats pass their reconciliation bill, the infrastructure deal isn’t going anywhere—no matter how popular it is. And the $3.5 trillion package is still very much in limbo.

“The White House, the House, and the Senate have reached agreement on a framework that will pay for any final negotiation,” the Senate majority leader said at Pelosi’s press conference on Thursday. “It’s a menu of options, and it will pay for whatever the agreement on the investments comes to.”

But when pressed for details, Schumer declined to “get into the specifics.” And his announcement caught some of his Democratic colleagues off guard. “I have an intuition about it, but it’s only an educated guess. I have not been briefed [on the framework],” Sen. Tim Kaine told The Dispatch Thursday afternoon. But he said it seems like negotiators are “making progress.”

“Making progress,” in this instance, essentially means trying to convince moderate Sens. Joe Manchin and Kyrsten Sinema—whose support is needed to reach the 50-vote reconciliation threshold—to support the bill. After meeting with the president Wednesday, Manchin said Biden asked the West Virginian to “give me a number” and “tell me what you can live with and what you can’t.”

Manchin has thus far not done so, at least publicly.

A version of this article first appeared at TheDispatch.com.

Rachael Larimore is managing editor of The Dispatch. She wrote this for InsideSources.com.