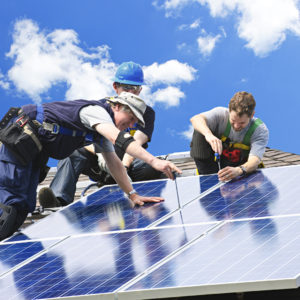 When it comes to solar power, the forecast seems only partially sunny. The industry has long benefitted from federal subsidies, but the future of these programs is uncertain. On Wednesday, the Department of Energy announced that it was investing $46.2 million in 48 solar energy projects as part of its SunShot Initiative. The timing of the investment is somewhat unusual, though, since the industry has struggled in recent years. Investor interest in solar energy companies has been declining for several years, the result of a slew of major bankruptcies and overall difficulty bringing the technology successfully to market.

The SunShot program began in 2011 and has a goal of making solar energy cost-competitive with traditional energy by 2020. Through this program, the federal government funds solar research at National Laboratories, the study of solar panel use on federal lands, education on the benefits of solar energy, and solar incentives and subsidies.

The latest projects fund programs researching early-stage solar technology and methods of creating improved solar cells. Out of this money, $25.7 million will provide investment funding for 20 startup solar energy companies, a sort of federally-funded incubator program. These investments in companies working to develop cutting-edge energy storage and solar generation technology are a source of both risk and reward for SunShot. Even in a friendly regulatory environment, solar energy has never been a consistently successful return on investment.

Thus far, solar energy has shown itself to be a mixed bag for investors. In April, Sungevity, formerly the fifth-largest residential solar panel supplier in the United States, filed for bankruptcy. The company’s filings stated that it has lost nearly half a billion dollars between its founding in 2007 and bankruptcy in 2016. Despite examples like Sungevity, Sunnova, a Houston-based residential solar energy system company, has raised more than $2 billion in venture capital over the past four years, and in fact raised nearly $775 million in venture capital during just the first four months of 2017.

Although the program is receiving funding now, its future is uncertain. In FY2017, the Department of Energy dedicated $285 million to support SunShot. This was about 45 percent of the total funds earmarked for renewable energy development that year. The budget stated that the money would help modernize the grid to better integrate solar energy and would support the development of solar forecasting technology.

Whether these funds will remain next year is unknown. The Department of Energy potentially faces 6 percent cuts in Trump’s proposed FY2018 budget. At first glance, this does not seem like much, but the some of the deepest cuts come to clean energy programs, including the SunShot program. Trump’s proposed budget would cut the program’s funding by up to 71 percent.

Supporters of the program say that it has succeeded in several of its goal so far. Last year, the program boasted that over the first five years of the initiative, the installed price of utility-scale solar without incentives had fallen 70 percent. Its goal was a consumer price of $0.06 per kilowatt hour for residential energy. At the end of 2015, solar prices were as low as $0.11/kWh.

As a result of these conflicting signals, the future of the SunShot program–and much of the federal government’s investment in solar energy–will likely rest with Congress. Already, the program is in the crosshairs of pro-taxpayer groups such as the Competitive Enterprise Institute, Americans for Tax Reform, and the American Energy Alliance, who wrote a letter to the House Appropriations Committee in late April specifically targeting SunShot as a program to cut.

“In practice, the initiative fuels lobbying and cronyism on a massive scale,” the letter said, noting that solar energy prices had failed to decline at the same rate as conventional energy, despite the existence of the program.

“The SunShot Initiative is ground zero of the solar subsidy machine, and needs to go,” it concluded.

The solar industry does receive support from some western lawmakers, however. If this will be enough to continue the existence of programs like SunShot, or if the size of future grants will continue to decline, will rest in Congress.