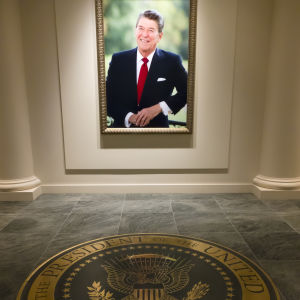 While Both Dismissed by Political Elite, Reagan and Trump Decidedly Different in Tone

Heading into Wednesday’s GOP debate at the Reagan Presidential Library, expect nearly every candidate to draw comparisons between themselves and Ronald Reagan, the 40th President of the United States and likely the most-revered figure in the Republican Party.

The attacks have also started, as the star of the upcoming debate, front-runner Donald Trump, was confronted with Michael Reagan, the late president’s son, telling CNN Trump is the least ‘Reaganesque’ of the candidates, and a new television ad is also contrasting the tone Reagan and Trump have taken on immigration.

While there may be a clear divide between Reagan and Trump on policy and tone, the two are still being likened for their biographies and their dismissal by political elites.

When Ronald Reagan burst onto to the national political scene, he was regarded as a political anomaly. And with good reason.

Where other politicians offered complex policy prescriptions for the problems confronting the country, Mr. Reagan embraced simple ideas, like the belief in the American spirit.

Where other politicians spoke in the hedged and even cautious language of politics, Mr. Reagan liked to throw rhetorical bombs.

And where other politicians approached the television cameras with trepidation, Mr. Reagan embraced the cameras as only a former actor like himself could.

Yet despite being considered a political outsider, Mr. Reagan defied the expectations of his detractors and wound up becoming one of the most consequential and revered American politicians of the 20th Century.

Now, nearly 35 years after Reagan first captured the White House, the story of his political rise is highly instructive, particularly at a time when the Republican presidential field is packed with self-styled political outsiders like Sen. Rand Paul of Kentucky and Sen. Ted Cruz of Texas.

But perhaps none of them invites as much comparison to Ronald Reagan as one man in the Republican presidential field: Donald Trump, the billionaire, real-estate mogul who has transformed the 2016 presidential election with his unconventional bid for the White House.

Mr. Trump has built a campaign around a simple proposition—restoring America’s greatness—an approach that echoes Reagan’s promise to lift the nation from a malaise deepened by gas shortages, inflation, unemployment and a hostage crisis in Iran. Mr. Trump’s campaign slogan is straightforward enough. “Make America Great Again,” it declares.

Trump also came to the Republican Party indirectly, after having spent years identifying himself as a Democrat. Many of his Republican primary rivals have attacked him for this, questioning his allegiance to the party.

But Mr. Trump reminds his critics that his path to Republicanism was no different than the one taken by Reagan, who started as a New Deal Democrat before going on to support Dwight Eisenhower and registering as a Republican in 1964.

“He was a Democrat with a liberal bent, and he became a great conservative,” Trump said about Mr. Reagan during a recent interview. “He had a great heart, and I have a great heart.”

Mr. Trump, too, revels in the fact that he is not a creature of Washington, much like Reagan was considered a Washington outsider. (Reagan was a two-term governor of California but never worked in politics in Washington.)

Not surprisingly, Mr. Trump draws fire from the Washington establishment for being politically naïve and oversimplifying complex issues. But like Reagan before him, Mr. Trump and his simple message are energizing voters who are clearly looking for an alternative to professional politicians steeped in the ways of Washington.

And finally, both men have an ability to connect with audiences in ways that make their opponents seem stiff and inauthentic. Not surprisingly, both men had ample training in the entertainment business before entering politics – Mr. Reagan as a movie actor and host of “General Electric Theater” and Mr. Trump as a star on “The Apprentice” and “Celebrity Apprentice.”

To be sure, Ronald Reagan, a singular leader in a different age, defies easy comparisons. But his path from political outsider to a man who redefined the nation’s politics may resonate today as voters carry on this extended flirtation with Donald Trump, whom many in both parties still dismiss as a political flash in the pan.

Almost from the start of 1979-1980 presidential cycle, Reagan was underestimated in many quarters. In fact, Democrats hoped Reagan would eventually emerge as the Republican nominee, convinced that he was the one candidate that a struggling President Jimmy Carter could defeat.

To Democrats, Reagan’s brand of conservatism was so extreme that he would end up sending more moderate, general-election voters into the arms of Carter, despite the problems that plagued Carter’s first term in office.

More than that, many Democrats had calculated Reagan was far easier to target for attack than George Herbert Walker Bush, who was also seeking the Republican nomination but who was a moderate figure representing the party’s establishment wing.

Democrats were not completely incorrect in their assessment of Reagan. He came into national prominence sixteen years earlier with a fiery speech he delivered on television backing the presidential candidacy of Barry Goldwater, a five-term U.S. Senator from Arizona who launched a conservative revolution with his 1964 campaign.

It was a speech in which Reagan laid down the principles of limited government that would guide the rest of his political career — and that would make him the subject of enmity and scorn among liberals. “This is the issue of this election,” said Reagan in his speech, “A Time for Choosing.” “Whether we believe in our capacity for self-government or whether we abandon the American Revolution and confess that a little intellectual elite in a far-distant capitol can plan our lives for us better than we can plan them ourselves.”

Two years later, Mr. Reagan went on to win the governorship of California, defeating the incumbent governor, Edmund G. Brown. In the years that followed, Reagan cemented his image as an uncompromising conservative who denounced social welfare spending championed by the left, while arguing for a restoration of America’s military might in the wake of the nation’s humiliating and painful defeat in Vietnam.

In the end, Reagan managed to provoke as much outrage among liberals as he inspired loyalty among conservatives.

By 1980, after Reagan defeated Bush to capture the Republican nomination, Democrats went right to work on trying to reinforce the darkest images that they could conjure about Reagan – that he would be a trigger-happy commander in chief, as well as a leader who was oblivious to the needs of the disenfranchised.

President Carter himself offered harsh words about Reagan that seemed to capture the attitudes of many Democrats who saw Reagan’s brand of politics as divisive. Carter noted that a Reagan victory could mean that “Americans might be separated, blacks from whites, Jews from Christians, north from south, rural from urban.”

Reagan went on to defeat Carter on November 4, 1980 by so much that the incumbent wound up conceding the race earlier than any major presidential candidate had since 1904.

Part of Reagan’s victory reflected public attitudes toward Carter, who seemed unable to respond to problems at home or abroad. But Reagan’s victory was also the result of Democrats failing to grasp Reagan’s broad appeal, as well as his efforts to amass support beyond just conservatives.

Consider his acceptance speech after winning his party’s presidential nomination in the summer of 1980 in Detroit.

He supported a “safety net beneath those in society who need help,” said he would work with the nation’s governor’s to end “discrimination against women” where it existed and invoked Franklin Delano Roosevelt, the Democratic icon. If that were not enough, he also selected George H.W. Bush as his running mate, a clear attempt to mend fences with the moderate wing of the Republican Party.

And none of these moves seemed to alienate conservative voters, possibly because Reagan had established himself as a man of such fiery conviction that few in his base felt there was any danger that he would betray them ideologically.

The question remains whether Trump will be able to bring voters together with the soft tone that Reagan found. A new ad out Monday highlights this difference. The National Immigration Forum Action Fund is running an ad primarily on CNN, the host of the debate, that contrasts Reagan’s words praising a country “teeming with people of all kinds, living in harmony and peace,” with Trump’s claims that immigrants are “bringing crime” and are “rapists.”

While there may be some obvious differences in tone, some experts see Trump being written off in the same way that Reagan was prematurely written off.

“The establishment critics said the exact same things about Reagan,” Jeffrey Lord, a former Reagan aide who is close to the Trump campaign, told The Telegraph. “Reagan was ridiculed as ‘not serious’ and a B-movie actor, and they said over and over he could never win — until he did. It’s happening again. I really feel it.”