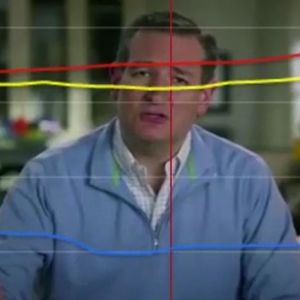 Those are key takeaways from recent television ads for Republican presidential hopefuls dial tested by the language-strategy firm Maslansky + Partners in partnership with InsideSources.

Ted Cruz’s “First Principles,” one of the ads recently tested by the firm, showed the Texas senator’s polarizing effect. In the clip, Cruz speaks in a soft tone but uses the spot to stress his hardline conservative positions, saying he “won’t compromise the values that make us who we are.”

Democrats expressed strong disapproval of the senator throughout the ad. In the dial testing, Cruz received more than strong support from Republican viewers and almost as much from independents with the line, “Our border isn’t a revolving door, and the rule of law wasn’t meant to be broken.”

“That negative gut reaction is an indicator that a Cruz presidency would be one of division and partisanship,” said Jenn Dahm Peterson, vice president with Maslansky + Partners.

The recent Donald Trump ad “Great Again” also got a mixed reaction from a key constituency.

According to the dial testing, independents aren’t sold on Trump’s tough talk. Their support was more mild — respectable, but notably less enthusiastic than Republicans’ assessment.

The billionaire business mogul evoked strong Republican support with his call for “a temporary shutdown of Muslims entering the United States until we can figure out what’s going on” with terrorism. He got the same strong GOP response pledging to “quickly cut the head off ISIS and take their oil,” plus “stop illegal immigration by building a wall on our southern border that Mexico will pay for.” The ad features the same talking points that have been resonating with Republican primary voters on the campaign trail.

Peterson has a theory on why independents aren’t responding the same way: She thinks that, outside the GOP base, people are skeptical of Trump’s more outlandish claims.

“Building a wall sounds great, but making Mexico pay for it goes too far. ‘Cutting the head off of ISIS’ gets people on board, but adding that you’ll also ‘take their oil’ makes it less believable,” she said.

One candidate who seemed to strike a good balance with a recent ad was Marco Rubio in his spot, “Lunatic.”

The Florida senator uses frightening language about “ever-growing threats” such as the leaders of North Korea and Russia. But when Rubio says, “Our allies don’t trust us. Our enemies don’t fear us,” he connected fairly well. Republicans were supportive while independents were neutral or slightly favorable to his statements.

Crucially, Peterson said, Rubio “doesn’t send Democrats diving. Their solid 40 is a reasonably positive reaction to a Republican candidate. Unlike [with] Cruz, these reactions point to Rubio’s ability talk about divisive issues, without alienating the other side.”

Most of these ads were tested with 68 viewers: 12 Democrats, 36 Republicans, and 20 independents. Jeb Bush had much the same success with his ad, “Force.”

The only exception was the Cruz commercial, screened with an audience of 93: 7 Democrats, 48 Republicans, and 38 independents.