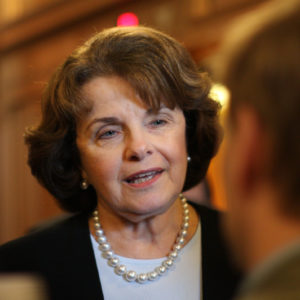 Leaders of the anti-Trump left have clung to two words as the foundation of their impeachment argument. For billionaire environmentalist Tom Steyer, it’s emoluments, or a fancy way of alleging that the Trump family gains wealth from the presidency a la Bill and Hillary Clinton with the Clinton Foundation. For Democratic Congresswoman Maxine Waters, it’s collusion and the charge the Trump campaign worked with foreign agents in 2016 against the national interest.

Both narratives are headline fodder for cable news, and for the better part of two years they beat this drum. If emoluments and collusion are of such national interest, the same level of Justice Department investigation, congressional hearings and media inquiry should apply to all elected officials, and in a particular case, the senior senator from California, Dianne Feinstein.

First, the emoluments. Since her time in the Senate, Feinstein’s husband, Richard Blum, has grown extremely rich. One could be suspicious of the $25 billion deal the Federal Deposit Insurance Corporation struck with the senator’s husband’s real estate company during the housing crash of 2009. It raises an eyebrow that as chair of the Military Appropriations Subcommittee, Feinstein approved millions in contracts benefiting her husband’s firm. One may question how Blum acquired a lucrative $108 million contract to sell post offices in California.

It’s not what you know, it’s whom you know.

“U.S. Senator Games the System, Gets Rich” would hardly make the front page. So, though convenient at best, sleazy at worst, none of Senator Feinstein’s familial business dealings rise to the level of national security. And that is because other dealings, far more questionable and nefarious, are shamefully underreported: the collusion.

Feinstein and her husband have a long relationship with China and enormous personal and professional investments. Few media outlets have pointed out that Feinstein has had Chinese spies in her office before. So it was not a surprise to those who follow this odd Chinese love affair that yet again a spy was found in her office — her driver and office manager of 20 years.

If China is embedding spies in the Senate offices of people willing to advance the agenda of the communist state, one must assume they are actively influencing other industries as well.

My organization, Power the Future, fights for energy workers in America, and the biggest threat to their jobs and livelihood is the well-funded, brilliantly organized and fanatically zealous green movement. I have spoken on TV and radio, and have written frequently about these green groups as agents of foreign nations who do not want to see America become the world’s leader in energy production. Even Hillary Clinton publicly acknowledged some of the largest anti-fracking groups were funded by Russia.

The National Resource Defense Council, a green organization with a nine-figure annual budget, has been called out by Congress for its actions on behalf of China, and questioned whether or not the anti-American energy organization should have to register as a foreign agent.

While the story of her communist Chinese spy/driver was breaking, Feinstein’s office was still casual enough to quote the NRDC is its anti-American energy press releases.

Is it not worthy of the media’s time to question who drafts her policy statement: staffers concerned for her constituents in California or Beijing? California employs tens of thousands of energy workers in California, and such positions as advanced by Sierra Club and NRDC threaten their jobs, but that seems counter to her husband’s business interests. While the media are questioning “collusion” with regards to President Trump and Russia on a non-stop basis, the real, proven, verified collusion with a foreign agent against the national interest of the United States is happening under their nose. And they stay silent.

There is sufficient evidence that both emoluments and collusion are part of Feinstein’s modus operandi. And the American people are the ones who suffer — energy workers in particular.  Every phony protest at a pipeline, every effort to block oil and gas and coal, only furthers the interests of our two biggest adversaries: China and Russia. It should raise tremendous suspicion that a senator with vast experience on the Intelligence Committee would ever put America’s energy interests second.

Feinstein is a vestige of the old D.C. ways, The Swamp, as coined by our current energy-industry loving president.  As President Trump pushes for an energy dominance agenda, Congress and the media should use their unceasing interest in emoluments and collusion to investigate those who put personal wealth and foreign interests above those of our nation.

Daniel Turner is the Executive Director of Power The Future, a national nonprofit organization that advocates for American energy jobs. Follow him on Twitter @DanielTurnerPTF