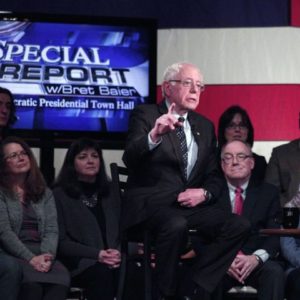 Sen. Bernie Sanders participates in a 2016 presidential town hall on the Fox News Channel.
[IS] Opinions

DNC Should Keep Fox in the Hunt

A recent decision by the Democratic National Committee has placed the term “tolerance” squarely on the Ambiguity Meter.

On March 6, Tom Perez, chairman of the DNC, announced in a statement: “I believe that a key pathway to victory is to continue to expand our electorate and reach all voters. That is why I have made it a priority to talk to a broad array of potential media partners, including Fox News.

“Recent reporting in the New Yorker on the inappropriate relationship between President Trump, his administration and Fox News has led me to conclude that the network is not in a position to host a fair and neutral debate for our candidates. Therefore, Fox News will not serve as a media partner for the 2020 Democratic primary debates.”

Perez’s decision came after an expose by Jane Mayer of New Yorker magazine chronicled Trump’s ultra-close relationship with Fox News Channel and some of the network’s outspoken talk-show hosts. Realistically, the Democrats could have used Mayer’s investigative opus to help lure to their side those moderate Republicans on the wavering list who watch Fox. But, by banishing Fox, the Democrats seemed to reflexively assume that those who voted for Trump in 2016 are blind loyalists beyond return — sort of like crossing the Rubicon.

Therefore, is the DNC ultimately saying that it doesn’t want Fox voters? However, what about that part about “expand our electorate and reach all voters”? (One could whisper the word “ambiguous” right about here.)

Perhaps, author/political commentator Jeff Greenfield, a speechwriter for Sen. Robert F. Kennedy in the 1960s, stated the DNC’s foolishness the best in an awkward discussion with Tara Dowdell, a Democratic strategist, on CNN’s “Reliable Sources” on March 10.

Greenfield invoked a comparison from the Cold War era to make his point about engaging with the opposition when he summoned the politics of Andrei Sakharov, a prominent nuclear physicist who helped the Soviet Union develop nuclear weapons but later advocated a cessation in the arms race when he became a political dissident and human-rights activist.

Sakharov won the Nobel Peace Prize in 1975, wasn’t allowed by the Soviet leadership to accept the honor in Oslo, Norway, and was exiled.

Part of Greenfield’s exchange with a relatively young Dowdell went this way:

DOWDELL: “You know, look, I’m not going to engage in something that was before I was born. What I will say is that at the end of the day, we know … I want to talk about what we know now in the present, here and now. And so, I think what we know here and now about Fox News is that it is an outlet … it’s basically completely aligned with the Trump administration.”

At that point, Greenfield rested his chin on his hand and appeared to shake his head in obvious disbelief, then uttered, “My point is, tactically, I think they (DNC officials) are blowing it.”

And there is this: It appears the DNC can’t tolerate Fox just long enough to try to win an election in 2020.

Especially when considering Fox’s far-reaching influence. Case in point: Anyone can read “AdWeek” magazine’s “Daily Scoreboard,” which tracks television viewership and the ratings game. Take the week of March 11 in cable television. The Top 5 cable networks for prime-time viewership were: (No. 1) Fox News Channel with an average of 2.38 million viewers; (No. 2) ESPN at 1.93 million; (No. 3) MSNBC at 1.86 million; (No. 4) HGTV at 1.28 million; (No. 5) History Channel at 1.18 million.

Note that the week of March 11 also was Conference Tournament Week during that annual monthlong basketball frenzy known as “March Madness. So, the analytics show the only cable network that could beat ESPN’s widely popular basketball coverage was Fox.

As Stacey Abrams, a black woman who was a Georgia gubernatorial candidate in 2018 and rising star in the Democratic Party, told us last month during a forum at the Brookings Institution in Washington: “I took nothing for granted when it came to reaching out to voters. We spread our message through ads on country music radio stations just as we did on urban stations.”

This brings us to the Ambiguity Meter. We thought the purpose of debates was to reach out to influence potential voters. Disseminate your message to millions. In prime time.

What about a president who attracts endless investigations like a Rock of Gibraltar-sized magnet? That could be anathema to some reconsidering Republicans — those who are bone-tired of hearing about congressional oversight, the Southern District of New York in the jurisdiction of the U.S. District Court and the just-delivered Robert Mueller Report.

Why lock out a huge swath of a TV nation in debate forums? Are the Democrats, in general, and the DNC, in particular, that intolerant of Fox? Or, we dare say, ambiguous?

One thing we know in this Fox case: The definition of “tolerance” lies in the eyes of the beholder.