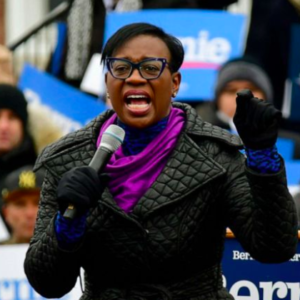 A fascinating — if largely overlooked — data point from the new Emerson poll of Democratic primary voters:  The more you like Bernie Sanders, the less you like cops.

Emerson asked Democratic voters how much respect they have for the police. Here are the results, broken down by the candidate they support:

Note the huge drop in respect for the cops from Biden supporters (65 percent) to Bernie Bros (22 percent). And a third of Sanders supporters have “hardly any respect at all?”

When it comes to anti-cop rhetoric, it’s hard to top Sen. Elizabeth Warren, who said that the entire criminal justice system — from cops on the beat to judges behind the bench — is racist “from front to back. And yet they have significantly more respect for police than Team Bernie.

Not the Sanders isn’t trying. During a forum at Benedict College, a historically black college in Columbia, SC, Sanders was asked what advice he’d give to a young black man being stopped by the police.

“Respect what they are doing so that you don’t get shot in the back of the head,” was Sanders’ answer.

One explanation for the lack of support for police among Sanders voters is that American progressives have a strong anti-cop attitude. Among Democratic candidates for president, Sanders leads with very liberal voters at 45 percent support, followed by Warren with 23 percent, Biden with 16 percent and Buttigieg and Yang with 4 percent.

“There’s a stronger ‘common enemy’ with the police among the Sanders voters,” Emerson College Director of Polling Spencer Kimball told NHJournal. “So if he goes out and says something negative about the police, I think his support would grow.  Meanwhile, Joe Biden supporters wouldn’t have that type of reaction. His supporters are more favorable.”

“We want finally to have a justice system that doesn’t gun down black folks in their houses,” Turner said in a recent essay. “We’re going to clean up this criminal injustice system. We need to have some truth and reconciliation about the ravages of racism in the United States of America.

“If you are black, if you are brown, if you are indigenous, and if you are poor, this [criminal justice] system is rigged. It is rotten to the core, and we’re going to unrig it so that ‘justice for all’ is not just an ideal but is practiced,” Turner says.

And of course, Sanders is known for his policy of allowing convicted terrorists and murderers to vote in our elections from behind bars.

Attacking America’s justice system and the cops who walk the beat as racist may be smart politics when it comes to appealing to progressives.

But with 53 percent of Americans telling Gallup they have “a great deal” or “quite a lot” of confidence in the cops, it’s probably not the smartest way to attract swing voters in a general election.