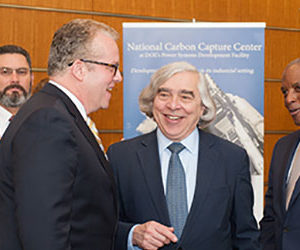 Do the Candidates Understand the Pace of Change?

My contention here is twofold: First, not everything that changes our lives is political. Second, not all technological change has to do with the internet.

In the same vein, not all progress will come out of the established agencies of private change, like Amazon, Apple, Google and Tesla.

Of all things, an electric utility has moved into the innovation space — and I expect to hear lot from it in terms of innovation. It is the Southern Company, under the dynamic chairmanship of Tom Fanning, and who is as close to being a free spirit as one could hope to find in the boardroom of a giant old-line company.

Recently Fanning said that Southern, which has five subsidiary operating companies powering the Southeast, is restructuring its proprietary research arm and extending its interests far beyond the traditional utility boundaries of interest.

Southern is on the cutting edge of utility technologies, including carbon capture and storage, and advanced coal combustion. It is also building two state-of-the-art nuclear plants in Georgia.

Fanning believes the remit of the electric utility runs beyond the flow of electrons. Hence, one of Southern’s newest and most revolutionary undertakings: the vertical, urban farm.

According to Fanning, the idea is to go to blighted city areas where there is a shortage of fresh produce — the kind produced by truck farms — and convert old industrial and office buildings into urban farms. “We’re taking vacant, commercial buildings and creating farms that are vertical. There, produce can be grown more efficiently with our light and water systems. One of the best things is that you don’t need to use pesticides,” he told me.

There is an echo here of the vertical street, proposed by the late management guru Peter Drucker. The difference is that Drucker did not have the resources of a Fortune 500 company to bring his dream to life. Fanning does.

Other things that are coming down the pike include the capture of carbon after combustion in power plants, steel mills and cement plants. What was a crazy scheme is almost a reality: so be careful before you join the lynch mob of fossil-fuel haters. A conference in Washington made carbon capture seem as feasible as solar energy sounded in the 1970s — then a bridge too far. Now rooftops sprout solar panels, and even Walmart roofs have them. Can carbon removal be far behind?

Then there is the revolution in manufacturing. Now, with additive manufacturing, we can build up goods rather than cutting them to shape: no more wasted glass, plastic or steel. Houses, bridges, even guns have been printed.

It ain’t gonna be your father’s factory. So if your plan is to bring back the factories of the Industrial Revolution, better think some more. The new factories will be smaller, more dispersed and, in many cases, may be in or near workers’ homes.

And before you lay into cutting government, be sure you do not cut out vital organs like the Department of Energy’s Lawrence Livermore, Los Alamos, Oak Ridge and Sandia national laboratories that maintain our nuclear weapons and have harnessed things like the seismic technologies that have changed energy supply and kept us as the world’s leader in physics.

These labs are the muscles in the strong arm of American technology. Never forget that the internet was invented by an arm of the Department of Defense. So do not malign government science and research.

Spare our technology, please, and do not get policy from the old tapes or old demagogues. The world is changing a lot faster than the talking points. If you are to lead it, you ought to understand that what was needed 10 years ago is not needed now, and technology will shape the future as much or more than you think you will, if elected.