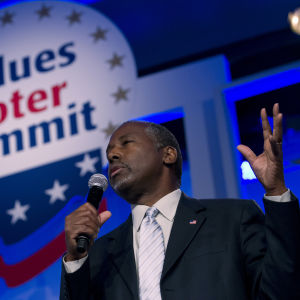 Do We Always Need a Religious President?

Republican presidential candidate Ben Carson caused controversy last week when he said he “would not advocate” a Muslim running the country.

Asked on NBC’s “Meet the Press” whether a potential president’s faith should make a difference to voters, the retired neurosurgeon said, “If it’s inconsistent with the values and principles of America, then of course it should matter.”

Pressed on whether he thought the Islamic faith was consistent with the Constitution, he said, “I do not. I would not advocate that we put a Muslim in charge of this nation. I absolutely would not agree with that.”

Other White House hopefuls in the GOP were quick to denounce Carson.

Appearing on NBC’s “The Tonight Show,” former Hewlett-Packard CEO Carly Fiorina said his comments were “wrong” because the Constitution forbids a religious test for office. However, she also made clear that she’d prefer her president to be a person of faith: “I actually believe that people of faith make better leaders,” Fiorina said. “I think faith gives us humility and empathy and optimism, and I think those are important.”

These comments are telling. Among other things, they help explain Gallup polling from June showing that a smaller percentage of Americans would support a qualified atheist for president (58 percent) as opposed to a qualified Muslim (60 percent). According to the survey, “The general trend is that Americans have become significantly more accepting over time,” but nonbelievers still face a significant hurdle in our current political culture.

One useful example of this phenomenon is Mitt Romney’s speech on faith in 2007. The former Massachusetts governor was worried his Mormonism might be a liability in a presidential campaign, so he delivered remarks explaining the role he believed God should play in public life. In order to further normalize his own religious traditions, Romney cast the secular movement as a boogeyman all Americans should fear: “There are some who may feel that religion is not a matter to be seriously considered in the context of the weighty threats that face us,” he said. “If so, they are at odds with the nation’s founders, for they, when our nation faced its greatest peril, sought the blessings of the Creator.”

Of course, secularism’s biggest boosters in Washington don’t see it that way.

Kelly Damerow of the Secular Coalition for America told InsideSources that voters shouldn’t assume they know much about a politician based on the church he or she attends.

Damerow added that atheists believe in “being good for goodness sake,” and she’s glad that opposition to candidates based on any form of religious discrimination seems to be fading away, albeit gradually. In the meantime, there’ll always be one religious group that has it worse than nonbelievers: people who literally worship the devil.

“I’d be interested to see how a Satanist candidate would do,” Damerow said with a laugh.