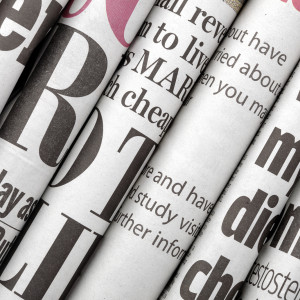 Do You Want a Faceless Algorithm Deciding What You Read?

Old friends from The Washington Post in the 1970s write to me, agonizing over where journalism is headed.

There is no shortage of news or need for news, but there is a desperate need to find new platforms to carry it forward.

There are three existential crises facing the news trade:

—How to finance newspapers.

—How to deal with the power of the technological behemoths, like Google.

—How to keep a flow of talent into the business while it sorts itself out.

Journalism has always been financed through a kind of subsidy provided by advertising. It has worked well enough, and sometimes enormously well. No one saw a day when the advertising would flee to a cheaper delivery system: the internet. But it did.

There were intimations of the vulnerability of the setup. Originally, afternoon newspapers were dominant: Go off work, go home and read the paper before bed. H.L. Mencken warned that morning newspapers, like his Baltimore Sun, would perish.

Instead of Mencken’s prophecy, the playing field tipped the other way; morning newspapers survived and, one by one, the afternoons failed across the country and the world. Television was the culprit.

In magazines, the television slaughter was more terrible and more complete. Great institutions, keepers of the culture, were swept away: Life, Look, Colliers and, saddest of all, The Saturday Evening Post. What had been citadels of power and wealth were toppled, not just in America but worldwide: Picture Post in Britain and Outspan in South Africa. All gone.

Newspapers and magazines are embracing the electronic future by becoming electronic platforms, old dogs doing new tricks. Also, the consumer is carrying much more of the cost of production. Newspapers selling for over two dollars? Unheard of a short while ago.

I was part of discussions in The Washington Post, where we turned down a cover price increase of a nickel, to 15 cents. “The public’s right to know,” it was reasoned, outplayed our financial gain. We were, so to speak, rich enough and could not see that changing.

Still there is no clear way ahead as to how to finance the new reality for newspapers. Some — the big ones — will prosper behind paywalls, but most are still looking for a solution. There is talk of subsidies, and there are pure web platforms that seek contributions: journalism as charity case.

There are hints as to the future here with paywalls and reader contributions, but these alone do not suggest a robust new business model.

The second existential threat is the new delivery systems. If Facebook and Google are to censure content — say, hate speech — they have moved the whole journalist enterprise to a new and dangerous place: The global behemoths deciding what should and should not be read.

Do you want a faceless algorithm deciding what you can read?

To me this is the greatest threat to journalism and the democracies it protects. Other ways exist, and new ones could be developed, such as libel laws and penalties for criminal mischief.

The great internet companies should remain what they are in reality: common carriers. If they become censors, freedom of the media is at stake. Virtuous censorship is still censorship and that is, by definition, without virtue.

Finally wages in journalism, except for a few employed by the television networks (themselves seeing the beginning of the end of the monopolies), are at a low point. Freelancing is worse off.

If improvement do not occur, the best minds coming out of the colleges will not go into journalism, they will go elsewhere, often law. Going forward journalism will not solve its problems without a decent flow of talent, and public will not be served either.

I can speak to this. In the last six years I was a publisher of commercial newsletters in Washington. My paid interns, gifted people, began to tell me that they loved reporting, and though they had studied it, they would go into law. They did not fancy a life of poverty. Their gain, our serious loss.