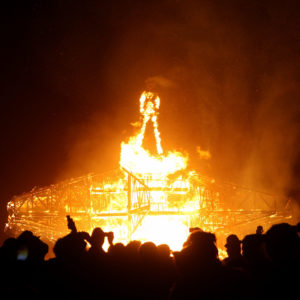 Does Burning Man Mean That a Post-Scarcity Society Would Be a Libertarian Utopia? Not Quite.

Every year, some 70,000 people descend upon the Nevada desert for an experience somewhere between an art festival, a music festival, and a tent city. The Burning Man festival bills itself as an “experiment in temporary community,” founded upon concepts of radical self-reliance, anti-consumerism, and self expression. At the Burning Man camp, “guiding principles” rather than strictly enforced rules govern, and even bartering has been replaced by the act of giving. It sounds something like a libertarian’s dream–and many would say that it is. In a discussion fostered by the Cato Institute, former Burning Man attendees acknowledged that to remain orderly, even this experiment in giving and radical openness requires understanding general principles that start to sound an awful lot like rules.

“Because cash exchanges and to some extent the barter system are banned in Black Rock City, Burning Man is often viewed as an anti-capitalist community that is very against the ideas of libertarianism,” said Cat Murti, Senior Digital Outreach Manager at the Cato Institute.

“However, as a voluntary association driven by freedom of association, self-governance, non-violent dispute mediation and emergent order, Burning Man is in many ways somewhat of an example of modern liber-topia,” she said.

Burning Man largely functions as an “independent governing system.” When choosing to attend, people decide to follow the guiding principles of the festival. This, combined with the necessity of purchasing a ticket, emphasizes the voluntary association inherent in the festival structure. Political philosophers discuss how societies are formed of this sort of free association. In practice though, most examples involve other external factors, such as where a person was born or the trade they work in, which influence where and how they choose to live.

For the 10 days of the Burning Man festival, people create this sort of voluntary society, bringing with them everything they need to not only survive the week, but also create art and music.

“We can think of Burning Man, to an extent, as having an independent governing system,” says Mark Lutter, president of the Institute for Innovative Governance and a Burning Man attendee. “For example, there is no exchange. Not only is there no money, but there is no barter. So you need to bring with you everything that you are going to use for the week.”

The rule against bartering is not strictly enforced. Rather, the culture of the camp is one of both self-reliance and giving, where people both strive to take care of their own needs and to share their extra materials and food with others.

Lutter explained how the unusual social rules of the camp create a different social structure and, by extension, a different community experience than life outside of the camp.

In this way, the camp is a sort of social experiment. That doesn’t mean that the camp it out to change the world, says Robert Mariani, who considers this a key difference between it and other festivals like Woodstock. To Mariani, part of what makes Burning Man an interesting social experiment is that such a festival could only emerge from a society of wealth and plenty.

“I think the alternative world that Burning Man is creating is perhaps the best thing that might map onto a post-scarcity society,” he said.

This means that, more broadly, the American economy is able to provide burners with the tents, foods, lip balm, and other things they need to survive the festival. Once they arrive at the camp, different rules exist, but only for a temporary period of time. This limited social experiment exposes some oddly traditional social norms, including a desire for organization.

Burning Man is not fully given over to hedonism. Without scarcity, people still have a desire to organize into communities with obligations to each other. The rough surroundings mean that people are responsible for their own survival and comfort, realities that push them into community and organization.

Oddly enough, this supposedly post-scarcity society is built in an area where the landscape itself provides a challenge to survival and, by extension, an incentive to create communal bonds.

At its heart though, the giving economy of Burning Man exists as something temporary. The camp only needs to function for a little over a week. As a result, it escapes the need for much of the regulation that governs the smooth day to day existence of cities and towns. In part, this reflects the reality that people behave differently when they know that they will only be together for a limited period of time.

“I don’t think that Burning Man is particularly libertarian at its core. But I think that there are a lot of libertarian things to learn from it,” said Jeremy Tunnell, co-founder of the digital company Thumbtack. “I don’t want to oversell it as a petri dish to see which libertarian ideas work and which ones don’t. I think you can tell which ideas are going to work with a really short testing time.”

Some successful ideas include the Rangers, voluntary mediators who walk through the camp attempting to help other “burners” work through problems, or its relatively lax approach to drug use, which “burners” credit with reducing incidents of violence.

This is not to say that the camp is without disputes. Grover Norquist described meeting hostility as a conservative in the camp during the Trump campaign. Even so, the free structure of the organization made these interactions less sustained than they might otherwise have been.

At the end of the day, experiment might be the best way to characterize Burning Man. For a period of a little over a week, different rules apply and a group of self-selected and rather dedicated people are able to create a new society. Whether that society would or could exist for a month or longer is another question altogether. America has a longstanding tradition of utopian communities that eventually return to normal society. Perhaps Burning Man continues because it recognizes this and allows the return to be annual.