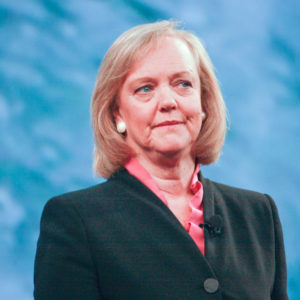 Does Whitman Really Agree With Clinton on ‘Most Important Issues’?

When Meg Whitman endorsed Hillary Clinton earlier this month, it wasn’t entirely surprising. The Republican fundraiser and Hewlett Packard executive is one of Donald Trump’s fiercest critics in the GOP, “explicitly comparing him to Adolf Hitler and Benito Mussolini,” according to the Washington Post.

Yet the way Whitman is now campaigning for Clinton, delivering an endorsement speech for her Tuesday in Denver, Colorado, should at least raise some eyebrows.

On Aug. 2, Whitman told the New York Times, “I don’t agree with [Clinton] on very many issues, but she would be a much better president than Donald Trump.” The argument made sense coming from a woman who was repulsed by Trump but, as California’s GOP nominee for governor in 2010, had fairly conventional conservative politics.

Apparently it wasn’t good enough for the Clinton campaign.

By Tuesday, Whitman was telling the Associated Press and KUSA-TV a notably happier story: “While I don’t agree with everything that Hillary Clinton proposes, I agree with lots of things that she proposes. On the most important issues — the economy, our role in the world, how we present ourselves around the world — I agree with her.”

The mention of the economy is particularly striking. It’s clearly why Clinton wants Whitman out there, saying as she did Tuesday that the Democratic nominee “will be better for business, for job-creation and for small business.”

But here’s what’s a little weird about that: Whitman ran for governor explicitly on “conservative economic principles.” Her policy proposals for cutting taxes and regulations were praised by right-leaning economists and panned by those on the left.

Isn’t it a little strange that she now supports Clinton’s plans, which have been praised by progressive groups and called “the most progressive agenda since Lyndon Johnson’s Great Society or Franklin D. Roosevelt’s New Deal”? It’s it a bit odd for a Republican to back a candidate pledging to sign a federal $15 minimum wage and hike taxes on the wealthy while increasingly shying away from free trade?

The most plausible explanation for Whitman’s view can be summed up in two words: because Trump.

Whatever her differences with Clinton, she believes Trump’s plan for a tariff on goods coming to America from Mexico and China “would sink this country into a recession.”

In a statement earlier this month, she said he would imperil the United States in other ways as well:

To vote Republican out of party loyalty alone would be to endorse a candidacy that I believe has exploited anger, grievance, xenophobia and racial division. Donald Trump’s demagoguery has undermined the fabric of our national character. Trump’s reckless and uninformed positions on critical issues – from immigration to our economy to foreign policy – have made it abundantly clear that he lacks both the policy depth and sound judgment required as President. Trump’s unsteady hand would endanger our prosperity and national security. His authoritarian character could threaten much more.

In backing Clinton, Whitman may also be securing her own future. Asked if she’d serve in the Democrat’s cabinet if she wins the election, she said, “We’ll see what happens.”